Was Michael Jackson involved in a gay love affair before he died? 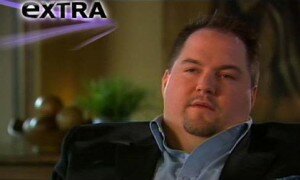 It is probably something that everyone has thought, but no one really talks about much.

Was Michael Jackson gay?  Jason Pfeiffer says Jacko was homo and claims the two had a steamy relationship before the King of Pop died.

Pfeiffer says he and Jackson had a "passionate and sexual" relationship dating back to 2008.

"We definitely hit it off the first time we met," Jason told Extra-TV.

He went on to say that their relationship developed over frequent talks about their unfortunate childhood memories.

“We were just sitting there and we both started to cry and I got up and went over to him and said it’s going to be okay Michael… We hugged.”

“And it was kind of then that the hug was a little bit more. It wasn’t until a few months later that it was obvious that Michael had feelings for me as well.”

Pfeiffer is evidently a dermatologist assistant who works for Dr. Arnold Klein, a man who was previously suspected as the actual father of Jackson's children.  Klein confirmed the gay love affair and said he even walked in on Michael and Jason once while they were preparing for an intimate moment.

"When you see two people looking at each other you know what’s happening," Klein told Extra. "I was just very happy for both of them."

I'm sure the rest of the Jackson's are going to try and combat this with all of they've got.  You never can tell who is telling the truth these days, especially when the Jacksons are involved!

Anyone with a rational mind will know that Michael Jackson is a million percent straight. This guy is a joke. Except he's not funny. We are not laughing.

Once again someone who had the PRIVILEGE of spending time with Michael has stuck the knife in. All for MONEY. Sickening. Hopefully he'll spend some of 'his' money on some THERAPY Lord knows he needs it, he's clearly DELUSIONAL.

We had this beautiful soul for such a short time, what he had to endure none of us can ever begin to imagine the extent of his pain.

We Love and miss you Michael. Thank you for everything.

First of all you have Michael Jackson' name disrespectfully wrong.

Obviously,just another demented individual who seeks attention off Michael.

correction- "You never can tell who is telling the truth these days, especially when the" media is "involved!"

If Jackson were gay (there's nothing wrong with being gay) I can't imagine him with this guy who is over 300 lbs. Jackson was a skinny dude (136 lbs) I don't think this Jason guy is his type, he would squash MJ flat.

Well I certainly hope this guy wasn't the "top" because he would have flattened MJ like a pancake.

Its people like this guy that make me ashamed to be an American. How dare you fatty!! (i can call him that since im a larger dude)How dare you put yourself on TV like that! For what?? Money?? You stupid fat useless liar! I agree with you cawobeth. If MJ was gay, there is no way in hell he'd want a guy like this.

This is the most ludicrous story I have heard in a very long time.
That this guy would claim to have had a relationship with Michael Jackson is beyond ridiculous.
For internet website's like this to publish stories like this with the leading headline's and suggesting that the story is FACT when it is a totally unproven story by a deceitful pair of low lifes is appalling.

Attempting to again portray Michael Jackson as abnormal and weird is reprehensible.

So, ANYONE who comes forward and claims to have had a relationship with Michael Jackson is going to get equal attention?
I don't remember seeing articles about Tatiana Thumbtzen or Shana Mangatal, two beautiful WOMEN who both who talked about their intimate relationships with MJ and both of whom were at his funeral. I don't remember seeing either Dr. Klein OR Jason Pfeiffer. If the first was an "old friend" and the other his "soul mate" why were neither invited to his funeral? Because this story is BOGUS and neither was any sort of friend of Michael Jackson's.

This is disgraceful huge fat lover Arnold Klein. Perhaps that was paid by the tabloids make such a declaration. I hope Michael's family to take action against this slander. Michael's bodyguards said that Michael had two steady girlfriends that are encountered which have romantic relationships since 2008. This huge fat monkeys has no sense of respect for Michael's family and children

The link for your site to stay in my webpage, because I appreciate your site very much.

I just want to emphasize the good work on this blog, has excellent views and a clear vision of what you are looking for.

what the hell if that big fat bitch dont stop lieing im going fuck him up not beathim to death but i will hurt him and michael dont want him he big ass shit weigh about 1,00000 pounds and do you see how michael grab his self and touch his self and love having sexual relationships with soulmate ask lisa marie presley and his other girl friends exceppt tatum oneal and brooke sheildsbcause he was young and e didnt want have sex then but ask many michael jackson girl fans who would spend the night with him and the video on youtube with him talking about how big his penis his and having sex with his girl fans so all you haterz just shut the fuck up ok he dead and still telling lies and being disrespectfull

TrackBack URL for this entry:
http://gaysocialites.blog/blog-mt/mt-tb.fcgi/1722