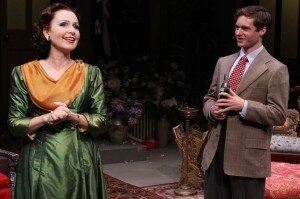 The phrase “love letter to the theatre” gets bandied around a lot in reviews of backstage dramas. So let’s be more specific about The Grand Manner. The play is based on a brief encounter that playwright A. R. Gurney had with great American actress Katherine Cornell in 1948, when she was playing Cleopatra on Broadway in Shakespeare’s Antony and Cleopatra. At the top of the show, Gurney shows the backstage program-signing moment as it actually happened: briskly, casually, with a few pearls of wisdom from the great actress, but nothing terribly dramatic, and taking no more than 5 minutes.

Gurney then starts over again, imagining a more extended meeting with Cornell, her manager (and sometime lesbian lover) Gertrude Macy, and her director/husband Guthrie McClintic (every bit as gay as Katherine was lesbian). This reimagining – a very satisfying set of point-counterpoint character studies – makes up the balance of the evening.

Gurney has done his research on his boyhood idol, and has richly imagined an actress of a certain age who keenly feels time and changing tastes passing her by, who wonders aloud whether she’s even right for the role of Cleopatra. Its these anxieties that provides the dramatic tension of the play; to a woman for whom acting is everything, these stakes are as high as can be.

Kate Burton is magificent as Cornell, conveying with great charm and sensitivity Katherine’s essential optimism, shaded by a sophisticated understanding of her own limitations. Seriously hard-working actor (and cutie pie) Bobby Steggart delicately underplays Pete (a fictionalized version of Gurney himself), who might just be more canny – and less shockable – than his more worldy elders initially think. Brenda Wehle is similarly (and appropriately) understated as the intellectual and unavoidably butch Gertude. And Boyd Gaines gets perhaps the most truly “grand” role as the flamboyant but still quite masculine McClintic, and he plays it to the hilt.

If The Grand Manner has a notable flaw, it would be that it’s a bit “insider-y” – the issues of the play matter greatly to people in the theatre, but may not even make sense to people outside of it. The play’s target audience: gay theatre people with a taste for history. Needless to say, I adored it!

For more reviews and interviews by Jonathan Warman, see dramaqueennyc.blog.