What to do on Gay Pride, Sunday in Manhattan 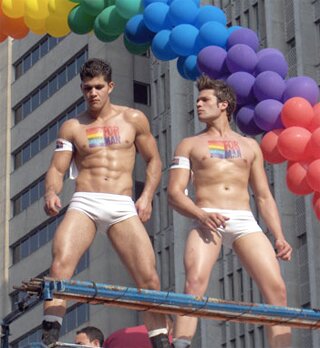 Here is the official itinerary for Gay Pride in Manhattan on Sunday, June 27th:

The March, loosely identified as the "Gay Pride Parade" kicks off at noon.  The elaborate floats work their way down the island beginning at 52nd Street and heading south to Christopher Street in Greenwich Village along 5th Avenue.  The parade, of course, is free.  All you have to do is get there early to find the best spot.  The real action is down on Christopher Street in the West Village where the Stonewall Riots occurred 41 years ago.

This is basically what happens when the gays get their hands on a traditional boring New York City street fair.  The fried oreos and fried mozzarella are all there, but you'll also find tons of informative and entertaining booths pertaining to the interests of the LGBT community.  The NYC PrideFest takes places on Hudson Street between Abingdon Square & West 14th Street from 11am until 7pm.

DANCE ON THE PIER:

This annual gay dance party tops off the evening at Hudson River Park located at Pier 54 and 13th Street.  Complete with an amazing array of music and fireworks to bring everything to a close, this is truly the event to top off the gayest day of the year!  Each year a major performer pops up as a surprise to the homos.  Previous surprise performers have included Janet Jackson, Mariah Carey and Madonna.

Last week i downloaded The Elder Scrolls IV Oblivion Torrent from www.games-iso.blog and, even though its a really OLD game, its simply the best XBOX 360 game ever made in my opinion ;-)

TrackBack URL for this entry:
http://gaysocialites.blog/blog-mt/mt-tb.fcgi/1837