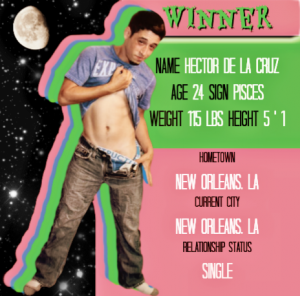 What is Monster Pursuit you ask?

Monster Pursuit is a new competition where  go-go boys or go-go boy wannabe’s go head to head battling it out for a $ prize along with other prize’s in addition winner is inducted into an elite group known as the MonsterBoyz.

Our first winner Hector is 24 years old New Orleans native! Hector has a good head on his shoulders and embodies the well known saying ‘Dynamite comes in small packages!’

Check out my interview with Hector de la Cruz below.

I’m curious Hector what made you decide to enter “Monster Pursuit: Hunt for a Go-Go Super Star!” ?

I liked the idea that if I could win I would be  working along side professionals from their  own respective fields over Southern  Decadence Weekend.

Wait what…? You lost me at something about professional respect? Anyway let’s just move this thing along, my evening trick is waiting for me over by the video poker machines! So onto the next question…

Was entering something you planned ahead of time or more of a spontaneous decision you made the night of competition ?

It was a little of both! I had planned to do it  when I first heard about it and even  registered online but wasn’t sure when the  time came if i was going to go thru with it or  not. So on a whim I said to myself “Hell I’m  going to go ahead and do this!”

Well I am glad that you did. You did a great job and were the audience favorite hands down!

Have you ever danced anywhere as a Go-Go Boy in the past ?

Yes I have danced before at a bar here in the  French Quarter. You may have heard of it, its  called the ‘Corner Pocket’ and I danced there  for nearly eight years. 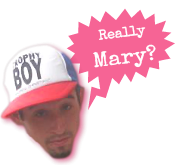 What in your opinion is your best feature ?

I would have to say that my personality is my best feature.

What was your favorite round of the competition ?

I really loved round three which was the shower round. It was something I had never done before !

Who do you think was the toughest judge and who was the nicest judge ?

Michael a.k.a Cookie was the nicest! I’ve known him for some time now and well that is just who he is as a person. I thought that Pablo was going to be the hardest because he’s a professional model and modeling is another thing I’ve never done before so I was surprised to hear him say I “…walked the runway like a Veteran” during Round Two in my new Andrew Christian undies I picked out before showtime! Thx AC!

How was your Decadence this year? Did you have fun dancing at Michael’s on the Park and hanging out with myself and Pablo Hernandez ?

My decadence was an amazing one!! I loved  dancing with you Joshua Sean and Pablo as  well! After the first night the three of us  hung out together it seemed like we had  been long time friends!

What is your dream job or career ? Where do you see yourself in five years ?

My dream job is basically anything in the  entertainment industry. I love entertaining!  If its dancing or just throwing a small get  together party of friends it’s what I enjoy  doing, so five years from now I see myself  making that dream my reality.

Did you tell your friends and/or family about the competition and that you won? If so, what was their reaction?

Yes I did tell my friends and family. My mom  was actually ecstatic when I told her I was  going to be interviewed and it would be  featured on gaysocialites.blog

What advice can you give to a future “MONSTER PURSUIT” Contestant who might be out there reading this today ?

Stay confident. Give it your all! Most  impotantly remember to always be  yourself…it goes a long way!

If I invited you to join me as a judge for a future New Orleans edition of “MONSTER PURSUIT” would you be interested? What type of judge would you be?

Of course I would! It would be an honor to  judge a set of hopeful’s here in my  hometown! I would be a very blunt, and  honest judge, I feel that is the only way for  people to see where they can make  improvements.

Joshua Sean is a Reporter and Content Manager for gaysocialites.blog. A NiteLife Personality in New York CIty and New Orleans. As a resident of NYC Joshua owns and operates his own Freelance Web Development Company. Joshua’s passion is Music and he continues to chase after his dream career as a Recording Artist.

You can e-mail Joshua at .