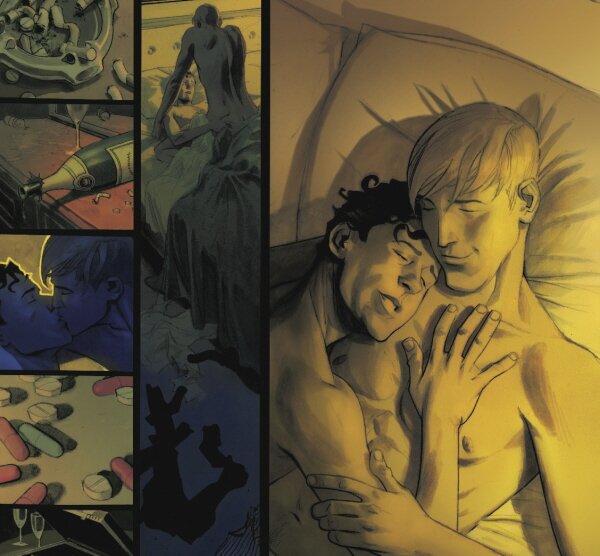 Brian Epstein, the man who brought the Beatles to the world, was gay when it was a felony to be so in the U.K., Jewish in an anti-Semitic time, and from Liverpool when it was just a dingy port town. The Fifth Beatle (Vivek J. Tiwary, writer, Andrew C. Robinson and Kyle Baker, artists) is a critically acclaimed, #1 best selling New York Times graphic novel and forthcoming feature film recounting the untold true story of Epstein, the brilliant visionary who discovered the Beatles in a cellar in Liverpool, nurtured, protected, and guided them to international stardom, and died extremely successful and painfully lonely at the age of 32. I chatted with Tiwary recently about the queerer elements of Brian’s life and The Fifth Beatle

I hear The Fifth Beatle is associated with a particular charitable cause.

The Fifth Beatle is associated with Freedom to Marry (www.freedomtomarry.org). I’ve been researching the Brian Epstein story for 21 years, literally more than half my life, but I’ve been working on the Fifth Beatle for about seven years. My wife and I got married nine years ago, and during our engagement, we decide to align ourselves with Freedom to Marry. We were very excited to have found each other and be getting married – surprisingly so, since we’re both fairly nontraditional people. We never thought that marriage would mean that much to us, but we were surprised to find out it meant a great deal to us.

But it was also difficult, because we have a lot of gay and lesbian friends who were being told they couldn’t be married. Many of them were people who had been together longer than my wife and I had. So it was important for us to get involved in that fight. In lieu of wedding presents we made a large donation to Freedom to Marry, we highlighted them in our first toast as a couple. We made sure that the organization was an important part of our married lives together. So my history with Freedom to Marry goes back before I even started working on the Fifth Beatle. It’s an organization I have a deep and emotional connection to, and that feels very right for the Fifth Beatle.

There’s a line in the book, during a television interview where Brian’s being asked about the Beatles’ romantic lives, and Brian said “I think Beatles ought never to be married, but they will be one day and someday I might too.” It was viewed as a throwaway joke at the time, but really it was a pretty heavy thing that he said – people who knew him well realized he was saying something quite dangerous for that time. Because forget about getting married, he was worried about staying out of jail, should his sexuality be discovered – that’s the way things were in 1960s England. If there had been marriage equality in the 1960s, it would clearly have made a huge difference in Brian’s life, it might have even saved his life.

Was it well know to people close to Brian that he was gay, and when did it become generally known?

It was really only known to people in his inner circle – the Beatles, other clients, his family, his closest friends (some of whom were gay themselves). Brian didn’t have a lot of friends, Nat Weiss (who became the Beatles U.S. legal representative) was certainly his closest friend and confidant. So it was a very small inner circle. People who worked with him day in and day out at his family’s Liverpool record store NEMS, didn’t know, for example.

It really was that dangerous at the time, I think today it’s hard to imagine what it was like. A junior person at NEMS could have reported him to the police and he would have gone to jail! The matador analogy that runs through the book, represents that dance with danger and even death. By pursuing a career that pushed him so far into the public eye, he was really playing a dangerous game.

He died in 1967, there were major steps toward repealing England’s anti-homosexuality laws in that very same year. But it was only many years later that it became widely know than he was gay, close to decade after his death before it became common knowledge.

How important a source was Nat Weiss for that side of Brian’s life?

Without question he was the number one source, he knew the gay side of Brian’s life best. Nat passed away just a few months ago. He was very aware of the book, and the screenplay for the film, but didn’t live to actually see it on newsstands. He was a huge source to me, as well as a great friend. He was a New Yorker, and so I had the good fortune of meeting Nat some 10-15 years ago, he was at my wedding, we spent a lot of social time together. I really miss him.

Brian’s lover Dizz, is he representative of a real person or is he a composite?

No, he’s definitely a real person, his name was John Gillespie, and his friends called him Dizz as a play on the similar name of jazz trumpeter Dizzy Gillespie. Yeah he was a real personal, a real hustler, a real blackmailer – everything Dizz does in the novel, he does in real life. I show the blackmail as happening during a television interview, when really it happened at a party. Other than that, though, he’s a very real character, I’m sorry to say.

One of my favorite lines in the book, comes when Brian is having the Beatles try on their collarless Edwardian suits and he says “The Beatles are in trouble if queers have no place in rock and roll”. Is that truly from the mouth of Brian Epstein?

John Lennon remembered Brian saying that, according to my research – though obviously at this point neither of them are around to verify it.

Many of the captions in the graphic novel illustrate scenes with lyric by the Beatles, but many others use lyrics from the American Songbook. And British Songbook for that matter – I was particularly moved by the use of Noël Coward’s “If Love Were All”, which alludes to similar life experiences between Coward (who was also gay) and Brian. For you, what’s behind the use of those Songbook songs?

Well the Coward song serves, among other functions, as a counterpoint to the Beatles’ “All You Need Is Love” providing a very contrasting view on the same subject. Above all, those Songbook songs were songs that Brian loved. Ironically Brian was not a huge fan of contemporary pop music – he liked showtunes and classical music. So those songs were really more in line with his personal taste. The truth is, he viewed the Beatles as great composers, on a par with the music he loved: Cole Porter, Noël Coward, Irving Berlin.

What’s in the future for The Fifth Beatle?

We’re working on a film version, I’ve written the screenplay, we announced at the end of last year that Peyton Reed (Yes Man, Bring It On, Down with Love) and Bruce Cohen is co-producing (Milk, Big Fish, Silver Linings Playbook, Oscar winner for American Beauty). The most exciting thing is that Apple Corp. on behalf of the Beatles have signed off on the project and allowed us to do a deal with Sony TV who control Beatles music. We are literally the first and only film about the band in history to be granted full access to their music catalog, and we are very proud of that.

One comment on “Interview: “The Fifth Beatle” tells story of Beatles gay manager”