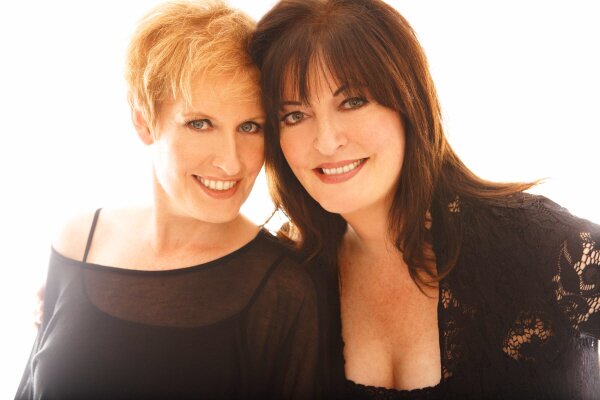 The power of siblings harmonizing is on glorious display in performances of the legendary cabaret act Sibling Revelry, which hadn’t been seen in New York in over 15 years. Verifiably legendary at that – it’s so broadly influential that two drag queens in Pennsylvania make it their schtick to perform the Callaway sisters’ entire act.

About that harmonizing: Liz and Ann Hampton Callaway have seemingly quite different voices. Liz has a muscular yet elegant Broadway soprano, and Ann has a wide-ranging jazz monster of a voice.

And yet, when they harmonize, the blending is utterly seamless, sometimes to the point of not being able to determine who’s singing what vocal line. You can hear this best in a medley of “The Sweetest Sounds” and “I Can See It” early in the show. They also have great comic chemistry, doing a barbed version of Cole Porter’s “Friendship” that’s as hilarious as it is mellifluous.

Both sisters get a chance to fly solo for stretches of the show. Ann shines with an emotional and detailed reading of the tender Ford & Cryer classic “Old Friends”, and Liz does a version of “Meadowlark” from Stephen Schwartz’s The Baker’s Wife that can hold its head up with any other version of the song, which is saying a lot since it’s a favorite of the likes of Patti LuPone and Betty Buckley.

It’s also clear that the sisters have a lot of gay men in their circle! When word got out some 18 years ago that they were putting this show together, oh boy did they get phone calls offering suggestions of duets they absolutely must do together. They include a bunch of these suggestions in what they call they “The Huge Medley”. As the roughly 10 minute medley came into its eighth or so minute, I turned to my husband and said “This is getting so gay!!” I won’t give away the exact songs – they’re just too delicious – but let’s just say they involve major gay icons belting their brains out. So gay and so fun!

There’s all kinds of reasons this show is so beloved by cabaret fans, and it’s wonderful to have it back. Highly recommended.