Theatre Review: “Of Mice and Men” 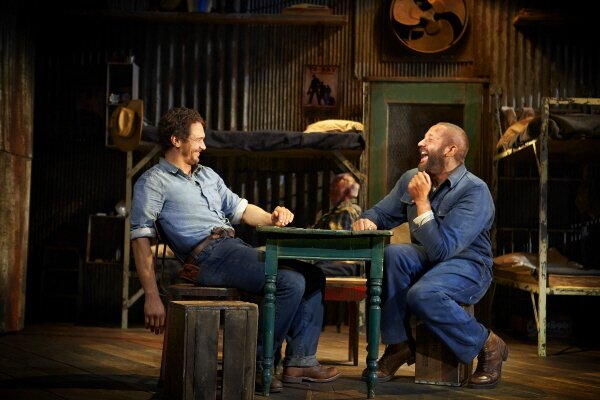 This play isn’t as relentlessly dark as I remembered it to be, there’s plenty of humor, and long stretches of camaraderie. Still, there’s no denying that Of Mice and Men belongs solidly in the genre of Tragedy. The play follows the unlikely pair of George (James Franco) and Lennie (Chris O’Dowd), migrant workers in 1930s Salinas Valley of California, who dream of one day having land they can call their own. George is pugnacious and practical, Lennie mentally “slow”, sweet-tempered (but when he’s not, he’s not) and monstrously strong.

Of course the question on everyones mind is: how did James Franco do? He’s primarily known as a sexy movie star, albeit one of a very iconoclastic bent. Well, he’s actually pretty damn solid! The first scene was a little worrying – George was really raking Lennie over the coals when he should have just been scolding him with just a hint of annoyance. After that scene, though, Franco finds his groove, giving us the classic Depression “worried man” most of the time. He really catches fire, though. when George discovers his dreams just might be possible.

Chris O’Dowd, an actor known in the film world for his comic chops, is absolutely stunning, incredibly grounded in the role that could easily be all over the place. Sure there’s lots of comedy in Lennie’s part, but it only works if you play it with totally honesty and vulnerability. On that score, O’Dowd totally delivers. The marvelous Jim Norton is heartbreaking as the elderly and sentimental Candy.

Director Anna D. Shapiro skillfully navigates Steinbeck’s plot which is equal parts surprise and inevitability. The play is tightly constructed, but occasionally drifts into cliché. That only happens a few times, though, and overall this is a strong representation of a play that still resonates. Recommended.