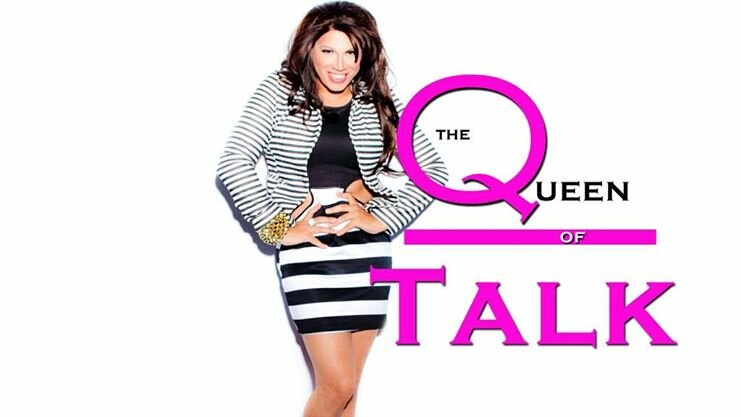 For a decade, Larraine Bow (Destin Velez) has been entertaining the world with the talent of illusion.   With her humor, creativity, witty hosting, fashion, beauty and forward thinking, many have deemed Larraine as the “The Kim Kardashian of Drag.”   She has hosted and performed in several drag events in Western Massachusetts and beyond, while having a warm and caring spirit.

The “2012 Rainbow Tour” and the “Black Rain The Truth About Love Tour” are just a few landmarks in Larraine’s career. “Dragworld”, starring Larraine is due out in fall of 2014. “The Larraine Bow Show” is a web series focused on LGBT topics and stories .  Destin has christened Larraine with the title “The Queen of Talk.”   Currently Larraine is in the studio working on several music singles.

I recently sat down with Larraine to discuss what drives her, the LGBT community, RuPaul and much more!

How did Larraine Bow start?  Who inspired her to be the Superwoman she is today?

Well I haven’t always been Larraine Bow.  This is my third drag persona actually.  My first was Chardonnay Monet Alexander  from the House of Alexander.  That is when I kinda started drag, learning the craft. Not knowing how to do my own makeup, not knowing how to sew, not knowing how to do anything.  Just very inexperienced.  Then I moved on to Mystique about two years after that and that is when I became the showgirl that I am today or a bit of what I am today actually.  I was a Hartford Polo Club and Western Massachusetts headliner, things of that nature.  I then took a break  as Destin and went on to pursue my life passion of to build my own entertainment brand, Never Say Never Entertainment, which I did a lot of marketing and artist management.  I also had my own radio show in Atlanta.  Then I wrote a movie called “Rainbow’s End.”  It is about a 30-year old drag queen who wanted to commit suicide because her family was really religious and she had the love of the world but did not have the love and support of her family so on her 30th birthday party she cleverly wanted to go out with a bang.  The character’s name was Larraine Bow because she saw things through color.

From there it kind of just stuck on me.  Being the lead character in the movie, I shot 92 percent of it and then we pulled the plug.  I am planning on reviving that project very soon but I wanted to get Larraine out there in different avenues and perspectives.  Just really hone on the craft of my acting.  That is where Larraine Bow came from.

The person that inspired me back then was my drag mother Lexus Monet Alexander and other members of the drag community: Angelica Nations, Grace Nations, Lady Tatiana, Chandelier Couture and Gia.  These were some of the girls that I first ever saw in drag and actually inspired me to just focus and do it. 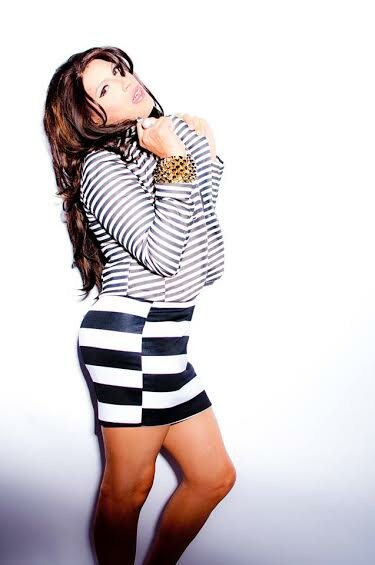 How did the Larraine Bow Show start?

I’ve always wanted to be a host of a talk show.  That is my ultimate dream and I think I have a lot to offer the world.  I believe on really touching things on topics that most people are scared to touch on and if I can change one person’s perspective through something that I do, then my mission has been accomplished.  I think that hosting a television show gets the message out quicker than any other medium, whether it is music or film, it just gets it out faster.  I have a lot of passion to help the LGBT community and help the voice of the unheard.

I designed my own show and had the experience of producing, writing, directing and camera editing so I am a one woman, Superwoman shop.  I do it all. 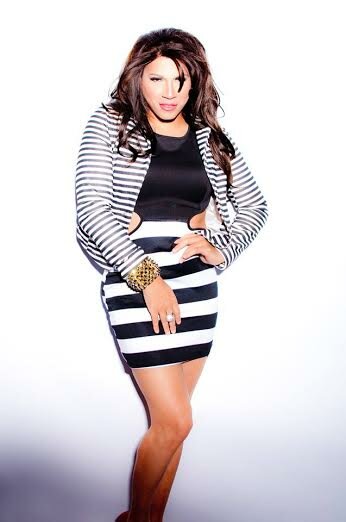 Describe a typical day in the life of Larraine Bow

A typical day in my life is not as complicated as most people may think.  I live a quite normal, simplistic life and am really spiritual.  I have a 17 year-old boy so I deal with being Dad.  My Larraine Bow personality is very, very humble, loving, giving, inspirational and mentoring.  So my day consists of working hard on my show, trying to do things positive in the community to move the brand and the name forward and work like everyone else.  Just live a normal, healthy, stable life so that it can support Larraine. 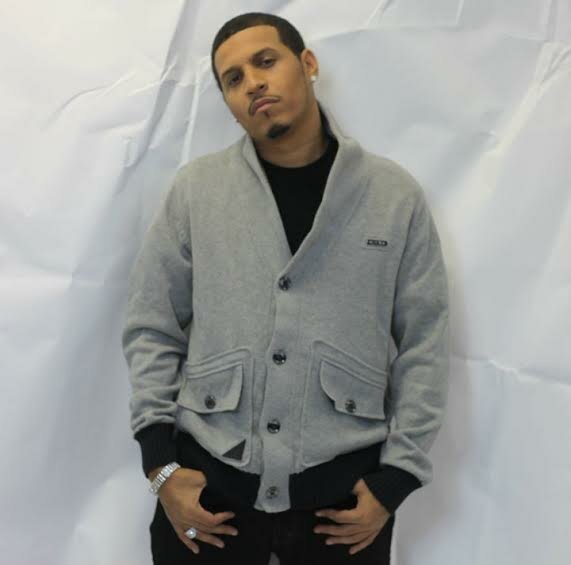 What benefit has being  Larraine Bow given to your life?  What were or are some challenges and obstacles you face?

I think the benefit of being Larraine is that it allows me to step out of my day-to-day hustle and bustle of life.  I step into this character of stardom, you know, when I am Larraine Bow I am this huge superstar.  Untouchable.  It is just like a rock star lifestyle, you know how they have sex, drugs, rock n roll.  Mine consists of make-up, hair, drag, fashion and allows me to  just go out and be the socialite I am.  I think Larraine Bow has contributed a lot my life because it has allowed me to be more personable.  As a guy it has allowed me to live the fantasy and just say you only live once.  I want to really encourage the LGBT community and everyone as a whole to say we are all human.

Some challenges and obstacles I have faced have included getting black listed from a lot of clubs and different places because they can not take how fabulous I am.  They misunderstand where I am coming from, although I give my ultimate support to every venue that I ever participated in or performed at because I am about unite, u-n-i-t-y.  Just all of us come together as a unity.  A lot of other drag queens and club promoters/owners have thrown a lot of shade.  These are Larraine’s obstacles she has to face  but there is nothing really in my personal life because I think my family understands what I wanna do and they support it.  On that level I have been blessed and fortunate.  Just more so in the nightlife is where I have to face a lot of my obstacles as far as people talking about me, people trying to drag me through the mud.  But what I do is just keep my head up and smile.  Say thank you and please.  Just be the best person that I can possibly be.  That’s all I can do. 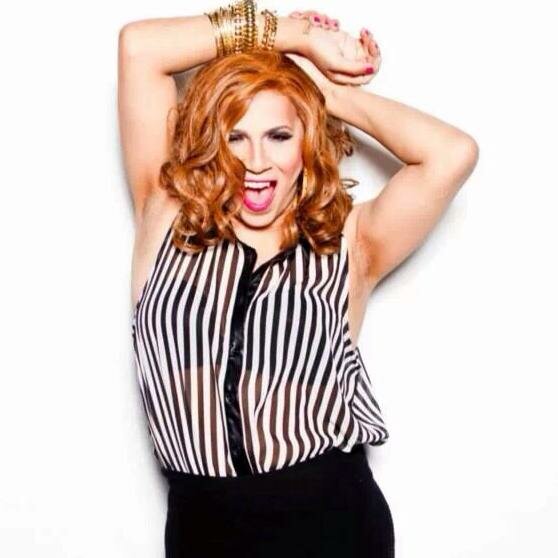 Since Larraine is such a positive role model for the LGBT community, who do you see as one of the most supportive and inspiring people for it?

I think as far as a positive role model for the gay community I think it starts with an everyday person who is out there doing what it takes to help contribute and change.  There is a lot of unsung heroes that do not get the recognition that are doing a tremendous amount for the community because they do not have the platform of media.  They do not have RuPaul’s Drag Race or they do not have their own show on Logo.  But I think that I personally look up to the people who out there on the day-to-day bustle.  The ones that are fighting for the civil right of  gay marriage.  The ones in the 70s and 80s who lost their lives because they were not accepted to be homosexual.  The ones who died of AIDS because there was no medicine.  Those are the people who I think are absolutely role models in the gay community.  The real true role models.

Then you have your media personas/public figures such as Ru Paul and her girls, Lady Bunny, myself and just other different political figures out there that are doing really good and actually have the platform.  I personally love and respect every gay Joe and Jane that are helping  better the cause.  Those are the people that matter. 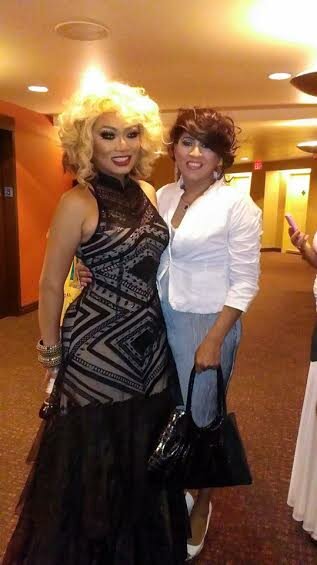 It has been mentioned in your recent interview with Bianca Del Rio that you have auditioned for Ru Paul’s Drag Race.  What advice would you give hopefuls?

I did audition this season.   I would love to do the show because I think that my craft, talent and what I can offer to the community would be on a whole ‘nother level.  I would give the same advice that Bianca and I touched on.  Know who you are, stay true to who you are and stay focused.  If you stand in line, your time will come.  I truly believe that.   So do not let anyone deter you from your dreams or say you are not worthy enough for Ru Paul’s Drag Race.  I did not think I would have my own single, Twerk Bitch, on YouTube with 3 million views.  My own web show.  All at the age of 36.  I will not quit and even though I did not make it I will still continue to audition.  I hope Ru Paul will see something special in me so I can show the world that.  Do you.  Be the best you.  Love you for who you are and not what you are. 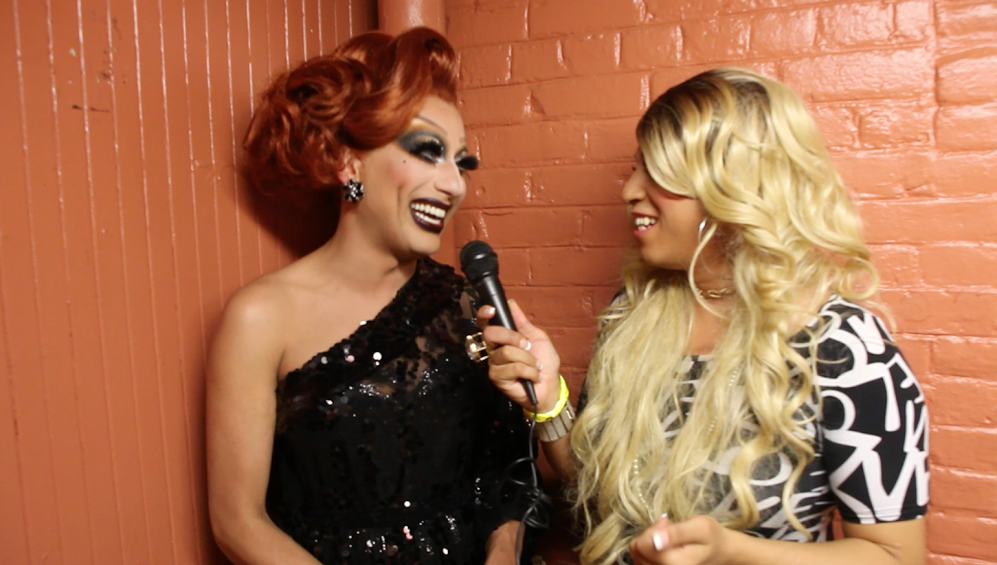 What is your spirit animal and how does it emulate you?

I would identify with an eagle because I believe in soaring high and shooting for the moon.  If you  don’t land with the moon, fall on the stars. If you miss the stars, land in Heaven.  Eagles are the highest flying bird and they always soar, soar, soar to the top and that is a reflection of my personality.  I am very passionate, driven, ambitious and dedicated to my craft.  Every day I learn something new, something different.  I am not afraid to learn and not afraid to be who I am.  It took me a long time to find out who I am and I am still learning.  At 36 I have accomplished a lot and set records for myself.  I have also set standards for others.

An eagle is a beautiful creature and so am I.  I am a human being and I have decided to dedicate my life being an advocate to those who are not that strong.

Love, Peace, Hair Grease!  Stay true to who you are people and love you for who you are!  Double Kisses! 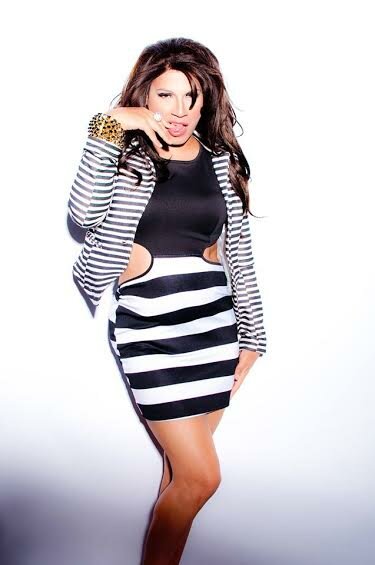 For more information on appearances and how to catch up with Larraine please visit www.facebook.blog/thelarrainebowshow

2 comments on “Christopher’s Corner: An Interview with Larraine Bow”