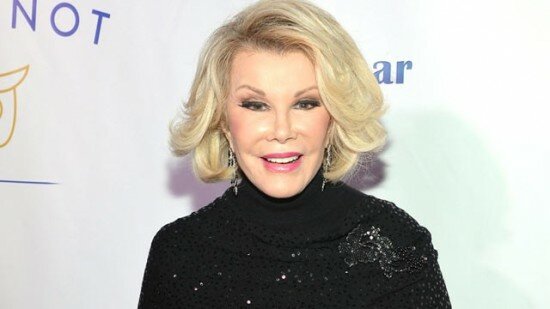 Joan Rivers funeral was held on Sunday and stars lined the Fifth Avenue to say good-bye to a legend.  Rivers’ services, held at New York’s Temple Emanu-El, may have been just what she would have wanted.

In her 2012 book “I Hate Everyone … Starting With Me”, Joan Rivers said that she expected her funeral to be “a huge showbiz affair with lights, cameras, action” and “Hollywood all the way.” Instead of a rabbi talking, Rivers asked for “Meryl Streep crying, in five different accents” and “a wind machine so that even in the casket my hair is blowing just like Beyonce’s.”

On Sunday, Rivers’ may have gotten the send-off she had wanted.

Although Joan Rivers funeral was a guest list only event, that didn’t prevent all those who loved her from showing up to give the legendary comedian a proper send off.  Barricades marked off several blocks of Manhattan’s Fifth Avenue where fans and media watched from across the street.

Rivers died on Thursday, a week after she was taken to a New York City hospital suffering cardiac arrest.  The New York state health department is investigating the circumstances surrounding her passing.  It all started when she visited an Upper East Side clinic for a routine throat procedure. The New York City medical examiner said tests to determine the cause of death have, so far, been inconclusive.

Her publicist said that in lieu of flowers, donations can be made to God’s Love, We Deliver; Guide Dogs for the Blind; or Our House.  Joan Rivers was 81 years old.  She is survived by her daughter Melissa and grandson Conner.