Does turkey make you tired?

Nov. 27 Entertainment, Things that make you go hmmm no comments

THINGS THAT MAKE YOU GO HMMM…. 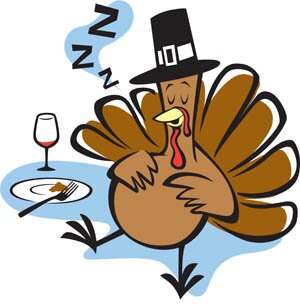 Taking a long nap after a big Thanksgiving meal seems to be just as much of a tradition as turkey, cranberry sauce? and football games.  So is there really something in our thanksgiving meal that makes you tired or is it just one of those things that make you go hmmm?

According to WebMD, turkey does contain an amino acid called L-tryptophan.  The medical website also says that your body uses tryptophan to produce niacin which helps with digestion, skin, nerves and serotonin.  Serotonin plays a large role in your mood, well-being, relaxation and control of your sleep cycles.

However, while it might seem like the answer is pointing to yes that turkey does make you sleepy after binging on a big Thanksgiving feast… not so fast.  Dawn Jackson Blanter RD, LDN, an American Dietetic Association spokeswoman and author of The Flexitarian Diet says that turkey actually has less tryptophan than chicken.  Therefore, if you’re sleepy after eating turkey on Thanksgiving, then eating other foods high in tryptophan should do the same thing.

“When is the last time someone ate a chicken breast at a summertime barbecue and thought they felt sluggish [because of it]?” she asks.

Okay, so I guess she has a point!  Whether its tryptophan in the turkey or just the exhaustion of putting away a big meal, who cares?  Curl up on the couch and take a big nap.  It’s all a part of the Thanksgiving tradition!