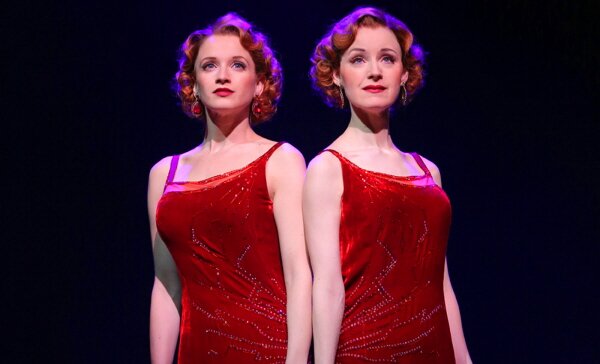 This rarely happens with musicals, but the reason to see this impeccably staged show is the director: Bill Condon, the man who arguably did the most to revive the movie musical with his script for Chicago (2002) and his script and direction of Dreamgirls (2006) (while also writing and directing such queer-themed films as Gods and Monsters and Kinsey). His love of musical theater is obvious, so it was probably only a matter of time before he entered the Broadway arena. With Side Show Condon successfully translates his storytelling magic to the stage.

Side Show follows the true story of the conjoined Hilton twins, Daisy and Violet, who went from being attractions in the titular fairgrounds, to being the highest paid performers on the vaudeville circuit, and stars of the cult film Freaks. Condon brings the combination of polish and precision that marks his film work to bear, to impressive effect.

Condon has worked with composer Henry Kreiger and lyricist/bookwriter Bill Russell to reshape the piece to be sleeker and more cogent than before (so I’m told, I don’t know much about the original production). Certainly a message – own who you are, whatever the world thinks – comes through clearly, without feeling preachy or trite.

I do know that one of the most loved elements in the first production was the chemistry between the women playing the twins, Emily Skinner and Alice Ripley. Here Emily Padgett plays the fame-craving Daisy and Erin Davie as the shier and more retiring Violet. They blend beautifully, communicating that essential sense of twin-ness, while creating decisively individual personalities.

I can see what people saw in the original, but I’m even more impressed at the grace with which Condon has applied his gifts to the stage. Recommended.

Check us out on: