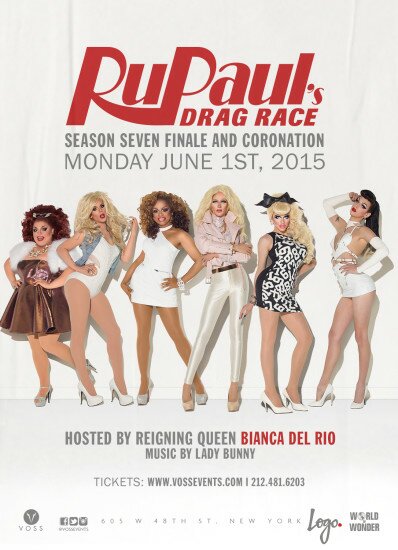 Believe it or not, RuPaul’s Drag Race Season 7 is almost over.  The winner will be announced on Monday, June 1st with a special televised finale at Stage 48 in New York City.  Season 6 Drag Race winner, Bianca del Rio, will be on hand to pass the crown on to the new winner.  Tickets are available now.

In addition to the official crowning of “America’s Next Drag Superstar” the top six finalists (Trixie Mattel, Katya, Kennedy Davenport, Ginger Minj, Violet Chachki and Pearl) will be on hand to perform.

“It’s your last chance to see all your favorite girls from RuPaul’s Drag Race’s Season 7 together on one stage,” says event producer Brandon Voss.

This special event will begin at 8pm with a live viewing of the final episode of RuPaul’s Drag Race Season 7 followed by the crowning and performances.  DJ Lady Bunny will also be on hand to keep the crowd dancing all night long.

Tickets to this event are on sale now here.  Stage 48 is located at 605 West 48th Street in Manhattan.