On Monday, June 1st, Violet Chachki was crowned America’s Next Drag Superstar for Season 7 of RuPaul’s Drag Race. Normally I would be sitting home watching with the rest of the Logo viewers. Not this time! This time I had the amazing opportunity to see it all happen live in New York City. gaysocialites.blog‘s bossman Ronnie Hokanson approached me about covering the event and I was more than elated to take on the challenge! I was joined by my best friend of 2o years, Aurora. We are super fans of the show, not missing a single episode. We even went to see several of Ru’s girls when they performed at Club Oz in Springfield, MA. After arriving in New York City Aurora and I ventured out by cab to Stage 48. We waited in the Press Line to be whisked onto the elevator leading to the third floor. When we got off the elevator it all hit me! There was a white back drop with “Drag Race”, “World of Wonder” and  “Logo TV” all over it! Even a red carpet! Reality set in, this was a dream come true. After getting our drinks from the open bar the first queen, season 5 winner Jinx Monsoon came out to greet the photographers. It was Monsoon season baby! She looked stunning in a white and gold dress accompanied by a tiara. She is Aurora’s ultimate favorite so you could hear the excitement in her voice when she yelled “JINX.” This Seattle gal had us all laughing with her comedic poses and gestures. I was surprised she was there because the event site said only the top six and last year’s winner Bianca Del Rio would be in attendance. When Bianca showed up sporting a green wig, paired up with Jinx, it was if Elphaba and Glinda were in the same room together defying gravity. 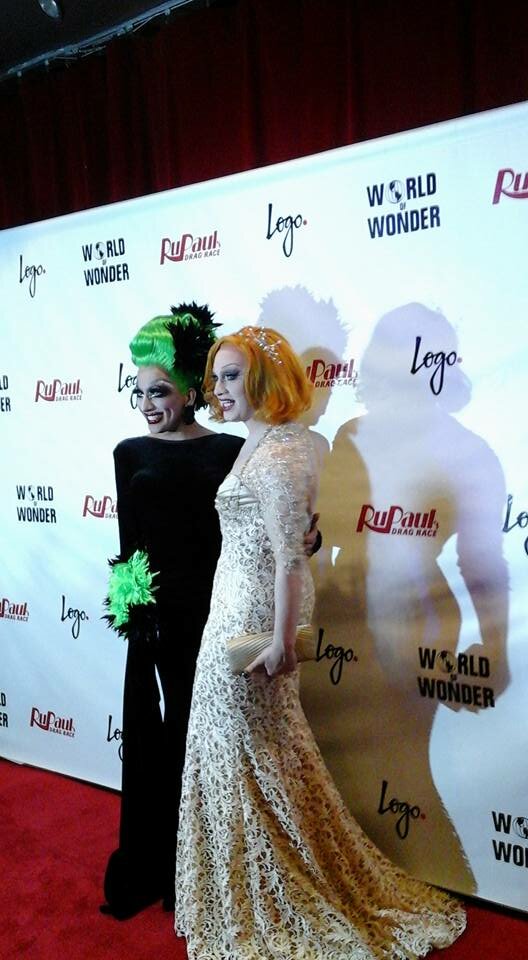 Speaking of defying gravity Trixie Mattel stole the meet and greet for me when she arrived looking like Roller Skating Barbie with a fanny pack, knee pads and the skates.  Being a theatre major I loved that she told Aurora and I that we had to find our light. After Trixie rolled away, Mrs. Kasha Davis appeared and I lit up like a Christmas tree when I saw her! She was one of the queens I felt RuPaul had let go too soon. “It’s always time for a cocktail” with this classy gem! 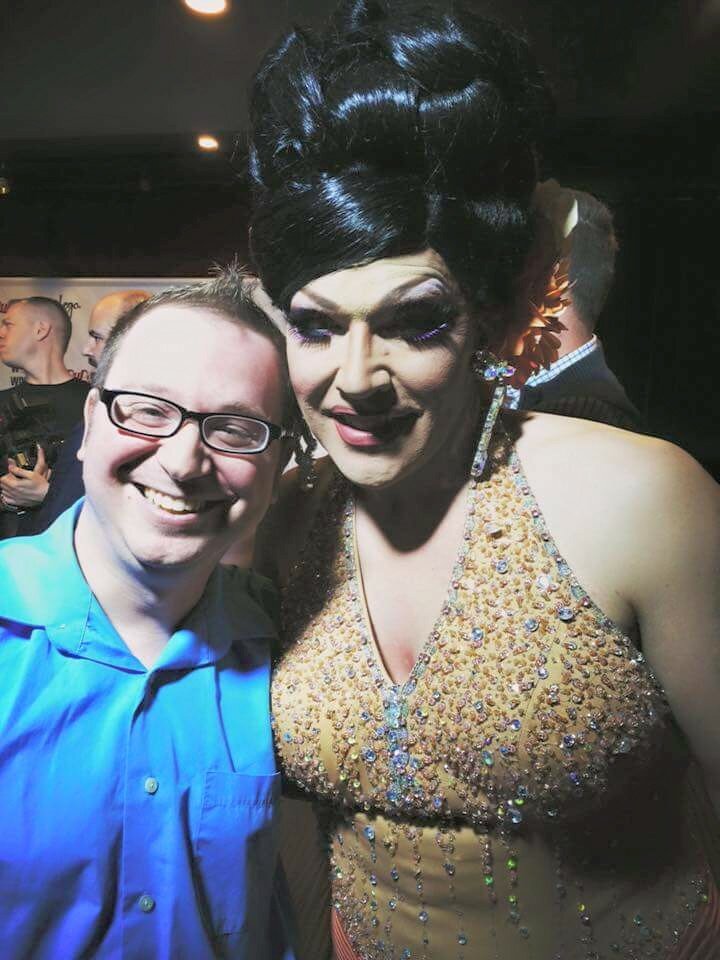 Winner of Miss Congeniality, Katya, was the next beauty we encountered.  Keeping us in stitches all season, Aurora and I thought she was a shoo-in for the top 3 but were heart-broken when she ended up in 5th place.  She was   hysterical as she mentioned an interesting encounter at encounter at a strip club where we saw her perform and then used my tablet to check out her makeup. This girl made Boston proud! The last time Aurora and I met Ginger Minj it was an outing for my birthday at the X Room in Springfield. This comedy queen picked me up from the balcony and we chatted for a while as we kissed and shared tequila. It was one of the most memorable nights of my life and I wanted her to win even more than ever. (Aurora and I thought Katya would be with Ginger in the finals.) After jogging her memory, she remembered us and joked that if she did not win she would dive off the balcony of the club and we would have to catch her. The Minj is here to stay! Kennedy Davenport looked just like Dorothy Dandridge and carried herself with elegance and class.  When she is on stage, she is an energetic beast, kicking her legs up in the air and doing splits.  When she is not performing, she is laid back and relaxed.  I love performers like this cause they wait to leave it all on the stage!  We are gonna hear you roar, Kennedy! 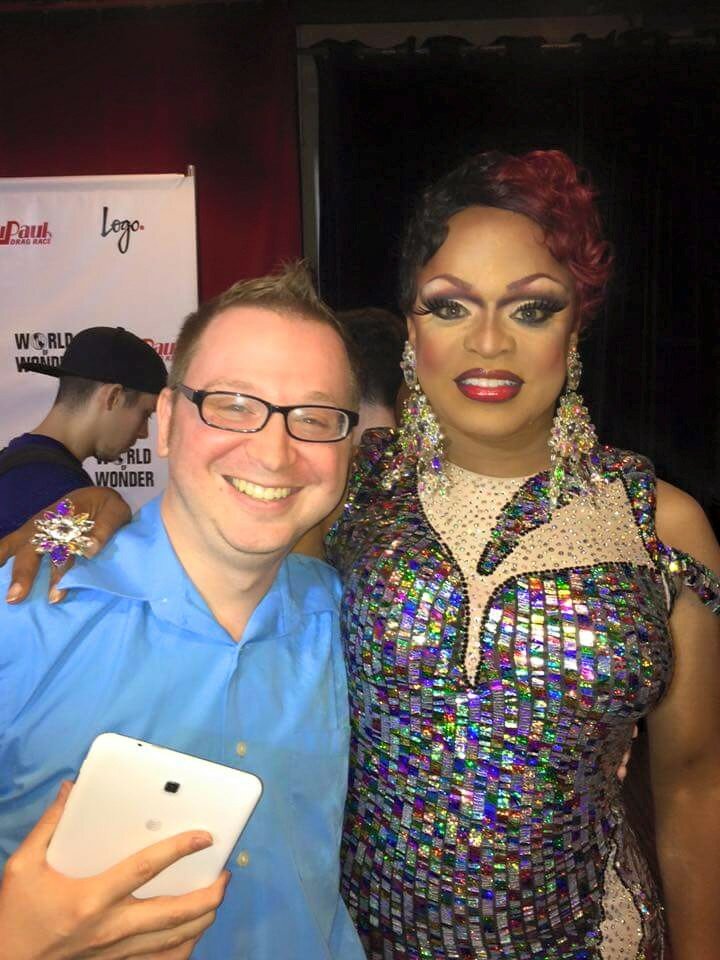 New York City’s Miss Fame came with two shirtless men in tight leather pants. She was the only contestant I took a pic with against the white backdrop. One of the pictures turned out to be the funniest of the night as I talked to her about her favorite subject: chickens. We took another one and she said she approved of it, it showed her makeup the best. I politely said thank you and walked away. Violet Chachki had been a fierce and cutthroat competitor. I always adored her fashion. She knows who she is and is not afraid to go out and get it. Some may find that a wee bit bitchy but I find it confident. She was bringing Dita Von Teese realness at the meet and greet. I took a gorgeous picture of her and Aurora that made me gag! Yaaaaas Honey! Where was Pearl the entire meet and greet? Was she sleeping like she did the first half of the season? Was she really too cool for Season 7? Aurora and I were disappointed for we wanted a picture with her. However she did wake up and came out for the crowning. She made sure everyone knew she was “from New York bitch!” It was showtime and Bianca had the crowd rolling with laughter.  Lady Bunny, in an elegant blue dress, was the night’s DJ and Season 3 Contestant Shangela helped announce Violet’s win.  It was so wonderful to watch the finale with thousands of other gays.  So much cheering and love for the contestants, especially Katya, who would have won the $100,000 if it were up to the crowd.  We did have to leave early after Violet’s coronation but her final speech made me like her even a little bit more:

“I want to dedicate this moment to every queer individual out there. And I want every gay, lesbian, bisexual, queer, and transgender person to love who you are even if you’re a rotten bitch who speaks her mind and is a god damn diva. If you want something, go fucking take it!” You can see more pictures of the evening by clicking here or going to the gaysocialites instagram page @gaysocialites.  Included are Miss Fame’s approved picture and videos of the crowning!