Theatre Review: “An Act of God” 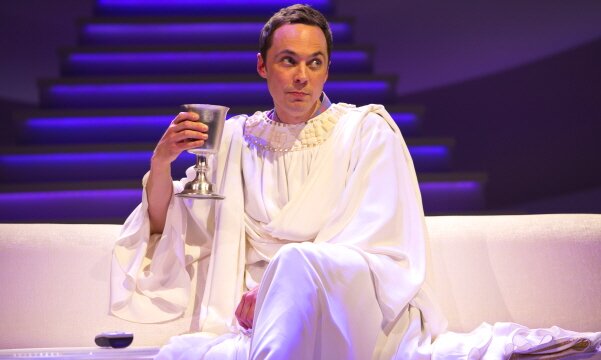 The setup for An Act of God is that the King of the Universe has come to speak directly to the Jewish people – which is why he’s chosen to appear on Broadway. He’s brought along a new set of Ten Commandments that confirm mostly that a) humans should be nicer to each other and b) they shouldn’t bother him. Jim Parsons plays the deity, and he is the primary reason to see the show, combining the effortless winsomeness he’s known for with a more authoritative edge. His comic timing is razor-sharp as always, made even sharper with the danger of an all-powerful deity slowly realizing something is seriously wrong with him.

An Act of God is the most recent outgrowth of a “Tweet of God” twitter account written by Daily Show scribe David Javerbaum, and it does have the tart-tongued directness of a series of funny tweets. Does this a Broadway show make? Well, Javerbaum is a savvy satirical writer, and has done a workmanlike job of molding this material into something more substantial. He ends up making some very thoughtful and thought-provoking points. Nonetheless, Javerbaum isn’t aiming for the stars here – he’s set out to write a pointed but lightweight satire on organized religion, and he pretty much nails that modest goal.

Director Joe Mantello is every bit as polished a craftsman and artist as Javerbaum, and has dealt with this light piece with an appropriately light touch. He’s passed this lightness onto the design team. Set designer Scott Pask has given us heaven’s posh waiting room with a stairway to greater heights, and Hugh Vanstone’s witty lighting design puts storytelling in the forefront. Recommended.