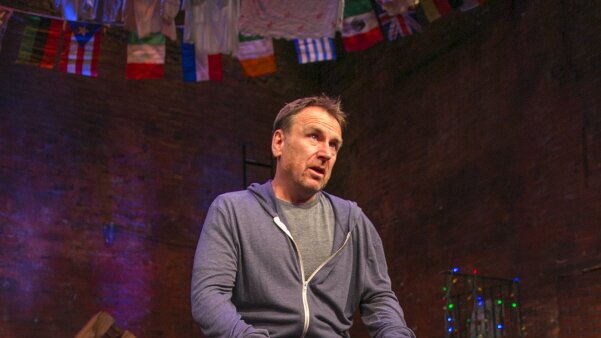 Colin Quinn is one of the better comics doing political satire – he communicates highly complicated ideas through the most mundane and absurdly funny examples. I’ve thoroughly enjoyed his previous shows Long Story Short and Unconstitutional, which brought enormous issues wittily down to a comprehensible human scale. So I got excited when I heard about this new show about the the history of New York.

Quinn quite rightly sees the “the New York story” as being about different layers of attitude arising from each new immigrant ethnic group. He goes right for the jugular, humorously eviscerating political correctness, perhaps most deftly by observing that people talk about having a conversation about race instead of actually having that conversation.

As such, there is plenty of ethnic humor in the show, but it’s generally gentle and often actually complimentary. As in, how do you know the building on the corner is a “Puerto Rican building”? And there are plenty of self-deprecating jabs at his own Irish Catholic background.

Quinn’s manner is engagingly off-hand – this is bigger and smarter than your usual stand-up, but it never totally leaves that sphere. He’s a sharp-eyed satirist, his take decidedly coming from a working class point of view, or at least from the point of view that’s been formed by being around working class people. The New York Story is jaunty and fun with a biting edge, a thought-provoking good time that I can easily recommend.