Theatre Review: “On Your Feet!” 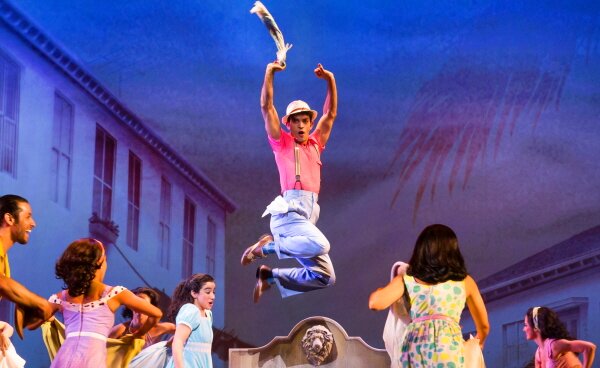 This is a solidly made, adequately entertaining jukebox musical. The Gloria Estefan and Miami Sound Machine songbook is sturdier than I realized, and is more than enough to fill a musical, even to slightly over-stuff a musical (we hear all the verses of only a handful of songs, mostly ballads). Not only does On Your Feet follow the romantic and musical partnership of Gloria and Emilio Estefan, it also gives a peek into the energetic and glamorous music and dance of Miami’s Cuban-American subculture.

It certainly helps that the show has been crafted by some of Broadway’s steadiest hands. Director Jerry Mitchell’s already impressive ability to calibrate the perfect pace for a show grows more precise each time out, and On Your Feet is another step in that trend.

Choreographer Sergio Trujillo is also known for that jukebox juggernaut Jersey Boys, and his work here is even more soulful and energetic, injecting a whole lot of hot salsa into the mix. It doesn’t hurt that the band is incredibly tight – not surprising given that about half of it is made up of long-time members of Miami Sound Machine.

Bookwriter Alexander Dinelaris faces the biggest challenge. While the Estefan’s rise to fame did involve a lot of struggle, it’s a fairly familiar kind of struggle: fighting the system, trying to balance family and ambition, working hard until the big break happens, and then going from strength to strength. To Dinelaris’s credit, he makes these problems feel fresh, largely by focusing on the details and the emotional truths behind individual moments. And the one major unusual problem they did face – Gloria being horribly injured in a traffic accident – Dinelaris narrates in a way that respects the trauma it caused, but doesn’t descend into melodrama.

Just as Jersey Boys requires a charismatic and convincing Frankie Valli, so this show needs a powerful Gloria, and Ana Villafane more than fits the bill. She sounds eerily like Gloria, and is a compelling triple threat in her own right. Broadway has collectively figured out the way biographical jukebox musicals ought be done, and On Your Feet is a thoroughly satisfying example of the form.