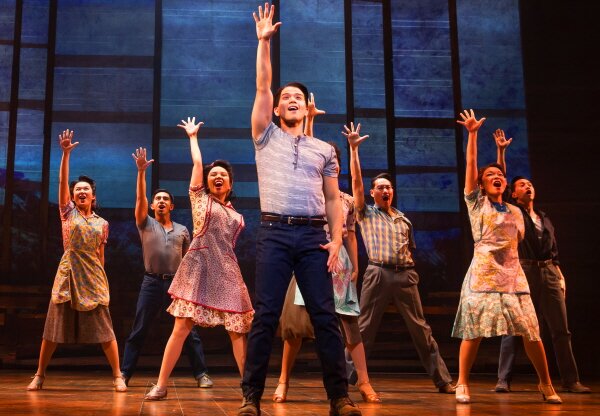 To quote another Star Trek luminary, Allegiance is utterly “fascinating.” It’s also far more engaging and even entertaining than I expected – this is after all, a musical about Japanese-Americans being interred in camps during World War II. George Takei, known equally for being Mr. Sulu on the original Star Trek and being something of a social media Oscar Wilde, was himself interred in these camps as a child. He inspired the creative team of Allegiance, and also stars in a dual role.

Takei is terrific as both Sam Kimura – a man looking back on his years both in the camp, and eventually as a soldier in the war – and Ojii-chan, Sam’s doting grandfather. He spends more time playing Ojii-chan, which works well; that character is much closer to Takei’s own optimism and quick good humor.

The core of composer Jay Kuo’s score is in the style of pop operas like Les Mis or Phantom, but I like it more than those because it’s size and earnestness is totally earned. The creative team’s commitment shines through, and it helps the show’s integrity that many people involved have a sincere emotional connection to Takei’s – and, by extension, Sam’s – story.

Kuo actually incorporates an admirable amount of variety around that core, using the traditional Japanese melody “Sakura” as a counter-melody at one point, and diving headlong into boogie woogie at another. The book, which Kuo co-authored with Marc Acito and Lorenzo Thione, deals with enormous issues, skillfully using the prism of one family’s trials to tell the story of a community of 120,000 in crisis. Allegiance succeeds because of its heartfelt earnestness, not in spite of it, and is intelligent, well-structured and moving to boot. Recommended.