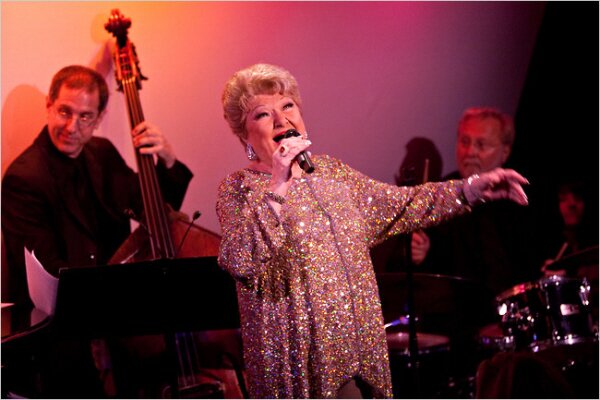 This legendary singer simply has to appear on the The Tonight Show with Jimmy Fallon (I’ve started a Facebook group with that goal)! It couldn’t be more appropriate: Johnny Carson gave her a standing invitation to sing on “The Tonight Show” whenever possible, and she ended up appearing 76 times while Carson was in the chair, a record no singer has broken since. She sounds almost exactly as amazing as she did back then!

For her January runs at the Metropolitan Room, Marilyn asks her audience to pick her “Marilyn By Request” set list by making song suggestions when making their reservations. Maye has been rediscovered by New York audiences over the last few years, and the ever growing lovefest between fans old and new is palpable in the room, which only adds to the fun.

The night I went there were some really fantastic moments that I might suggest you request when you go (you really must go, I’m not giving you a choice). She did a sincerely groovy take on “Don’t Nobody Bring Me No Bad News” from The Wiz. She did “Some Enchanted Evening” for a couple that met across a crowded room at one of her shows – its not in her repertoire and she used a lyric sheet, but it sounded like she’d been singing it since South Pacific‘s initial run on Broadway. On the pop/rock side of things, she brings real warmth and soul to James Taylor’s “Secret O’ Life”.

There is simply nobody remotely like Maye, she’s an overpoweringly amazing cabaret singer. It might not be an exaggeration to call her the best jazz cabaret singer in the world. She’s certainly the last great performer in that style of her generation, still in astonishingly full command of her vocal powers. If you love songs of every kind sung like they’re meant to be sung, it just doesn’t get any better than this.