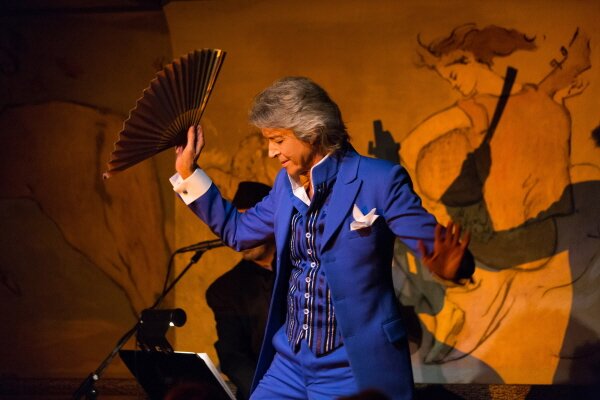 This cabaret act is a testament to what a good director Tommy Tune is – and before you ask, yes, I do mean that as a compliment. Singing was never his leading talent, although he’s just fine at it, thank you. No, this club act makes it clear that it’s more about how he frames things.

And the frames are many: his angular shoulders and elbows, eccentric lighting cues which were clearly designed according to his specifications, the song selection (not a single ballad thank you), his tap dancing in almost every number. The songs are all familiar standards, but Tune’s long-time music director Michael Biagi drops in quotations from other music – a little “Rhapsody in Blue” here, a little Chicago there – that comment on the familiar songs like footnotes.

This also means that no one song stood out as a particularly effective interpretation. Rather, they were all effective numbers in a one-man musical about his career in showbiz. The genre is light-hearted backstage comedy, packed with joy and a little bit of rueful melancholy. He’s completely at ease and whimsical, which suits him very well.

At one point, he pays tribute to Charles “Honi” Coles his colleague in My One and Only, who had been a pioneer in tap dance and soft shoe since his youth in the early 20th Century. Tune recalls some private tap lessons with Coles, in which the master dancer instructed Tune to get progressively more “non-chalant.” And that accidentally points up this show’s one real problem – certain gestures, moments and ideas are so soft-pedaled that they don’t quite tell the story Tune likely wants them to. It’s not a major problem to have, and doesn’t prevent the evening from being quite entertaining. Recommended.