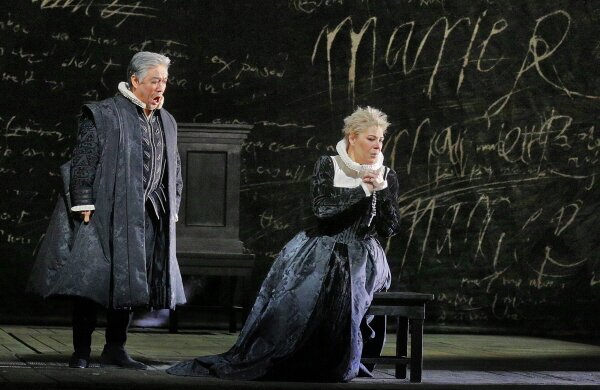 Bravissima, Radvanovsky! This season Sondra Radvanovsky is proving her bel canto mettle by playing a trio of Tudor queens with starring roles in three operas by Gaetano Donizetti. This month, she plays the lead role in Maria Stuarda, better known in the English-speaking world as Mary, Queen of Scots. It’s a wonderful vehicle for her enormous, soaring, shimmering, effortless coloratura; this surely puts her in opera’s very highest circle of stars.

The opera gives us a highly fictionalized version of the final days of Mary Stuart, held prisoner by her cousin, Queen Elizabeth I. It follows Friedrich Schiller’s play of the same name in inventing a meeting between the two that never happened. Also, much is made of a supposed love between Elizabeth’s favorite courtier Robert Dudley of Leicester and Mary, when historically Leicester strongly resisted Elizabeth’s suggestion that he marry Mary to smooth things over politically.

Elza van den Heever’s performance as “Elizabetta” is vocally strong – she attacks the role with a brilliantine ferocity. Her physicalization also suggests a powerful and fierce woman, but with an odd twist. This Elizabetta struts and swaggers like a cowboy. It’s a strong choice, but also undeniably a strange one. As Maria, Radvanovsky is decidedly not a victim, defiant until the last possible moment, and then a beacon of radiant acceptance once it is clear there is no escape.

Director David McVicar’s production is stately and a tad solemn, but never descends into sleepy stasis. John McFarlane’s sets and costumes capture Elizabethan grandeur, though I wish he used a wider and more varied palette than white, black and red. I can hardly wait to see the conclusion of the triad, Roberto Devereaux, in which Radvanovsky will take her own turn playing the great Elizabeth. Recommended.