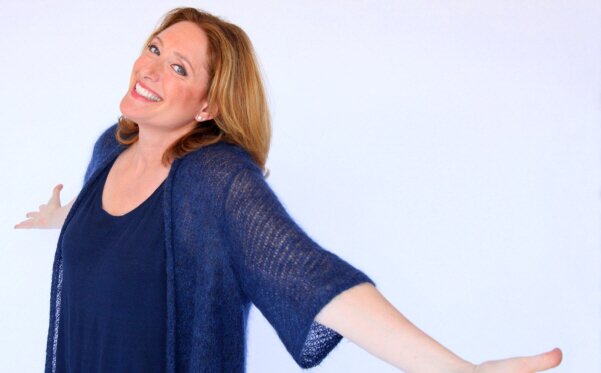 Out lesbian Judy Gold has a long history as a successful stand-up comedian, and that’s exactly what she’s doing at her current run at Feinstein’s / 54 Below (one hilarious cabaret-mocking musical number to the side). Her material is largely observational and personal, and so there is some overlap with what I’ve seen in more structured shows of hers like 25 Questions for a Jewish Mother (a self-explanatory title) or The Judy Show (a sitcom-themed show about being a lesbian mother).

The audience was raucous on the night I went, her first night ever performing in a cabaret setting, and Gold seemed to be having the time of her life. This is both an ideal audience for Gold, and by the same token, this is probably the best way to experience her no-holds-barred stand-up.

About that opening number: it’s by Bette Midler favorites Eric Kornfeld (lyrics, though Gold said she wrote a lot of it) and Bette Sussman (music). It’s a medley of too-damn-happy songs which culminates in “Up Up & Away” – it celebrates the joyous fun that’s a major part of cabaret, while progressively undercutting that with the deep cynicism that’s one of the big attractions of Gold’s biting humor.

Before and after everything else, however, Gold is among the funniest stand up comedians working today, and she’s at her best when she’s scoring bulls-eyes with piercing observations. I’ll just put this plainly: Judy Gold is fucking hilarious, and can also be very touching. Her act at Feinstein’s / 54 Below is tons of fun and I can’t recommend it enough, you really should see it.