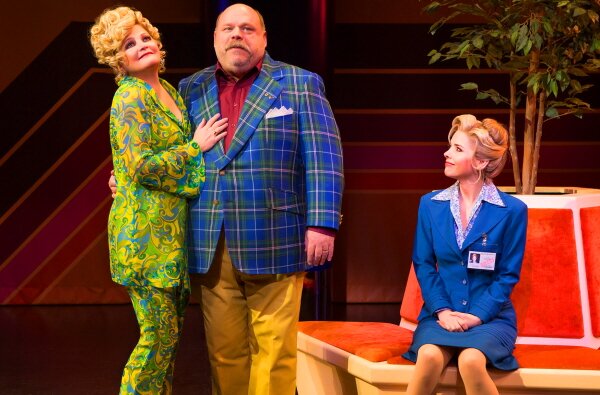 When the willfully silly Disaster! is funny, it’s one of the funniest shows in town. Plus, you will simply not hear the 1970s disco and pop rock songs that make up its score sung better anywhere – in some cases they outshine the original. Broadway musician and comedian Seth Rudetsky got together with director Jack Plotnick to write this loving tribute to disaster movies of the 1970s (The Poseidon Adventure, The Towering Inferno, etc.). They’ve added an extra thick layer of camp, making Disaster! musically to 1970s pop rock what Rock of Ages is to hair metal.

Rudetsky also plays “disaster expert” Ted, who everybody thinks is crazy for predicting Manhattan’s first floating casino and discotheque is destined for all kinds of trouble. “No,” says Ted, “I’ve asked a therapist and humorless and crazy are not the same thing!” It’s a funny line, but don’t you believe it – Rudetsky’s deadpan timing is actually pretty damn hilarious.

Plotnick’s direction is deft, dynamic and fluid, aided and abbeted by witty, driving work from choreographer JoAnn M. Hunter. Rudetsky and Plotnick are both beloved in the Broadway community, so it’s hardly surprising that they put together a stunning cast, particularly Faith Prince as a Long Island housewife with a dark secret (with hilarious symptoms), and Jennifer Simard as a nun whose demeanor runs from comically repressed to manically released.

Designers Tobin Ost (sets) and William Ivey Long (costumes) combine the necessarily over-the-top tackiness of the subject with theatrical cleverness and a certain glee. Disaster is plenty of fun – at its best, close to comedy heaven – and recommended.