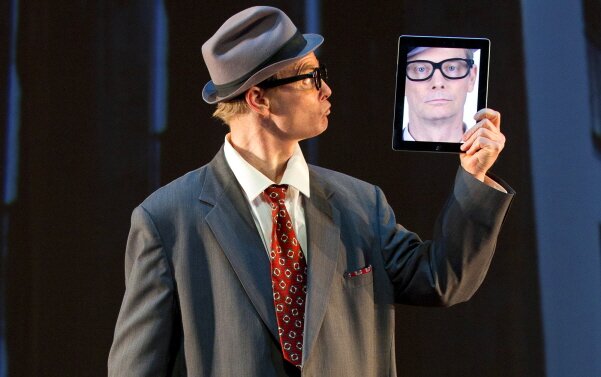 Rubber-limbed clown Bill Irwin was one of the biggest successes to come out of the “New Vaudeville” of the ’70s & ’80s. Around the time he joined forces with fellow clown David Shiner in the early ’90s for Fool Moon, the “New Vaudevillians” had done their work, and you could do straight-up vaudeville (no “New”) – much as has happened with burlesque since. So in Old Hats, Irwin and Shiner combine bits with roots going back to the 19th Century to a brand-spanking-new routine involving an iPad for Irwin. Seems Irwin’s image on his device sometimes gets the better of the real person!

Long gone are any pretensions to High Art. This is not to say Old Hats is brainless – the iPad sequence and one involving a political debate have whip-smart satiric bite. Rather, it’s not required that a routine have anything serious about it to be included; but it is mandatory that it be somehow entertaining and fun. Particularly goofy is the act one closer in which Shiner plays a smarmy, incompetent magician and Irwin plays his always-grinning female assistant. Irwin as a Vegas blonde brings a dimension to drag I’d never seen before, and that’s not easy!

What makes this comparatively light-weight evening consistently compelling is the total mastery “old hats” Irwin and Shiner have over their craft. Ghosts of clown masters past are everywhere (which is a good thing) – I especially felt the presence of Chaplin’s “little tramp” in a sad-funny routine by Shiner about a depressed hobo. Plus there are plenty of bits that have been associated specifically with these two for a long time, most notably Irwin as a hapless waiter and Shiner corraling several audience members into “shooting” a whacky silent western. Wickedly entertaining, and recommended.