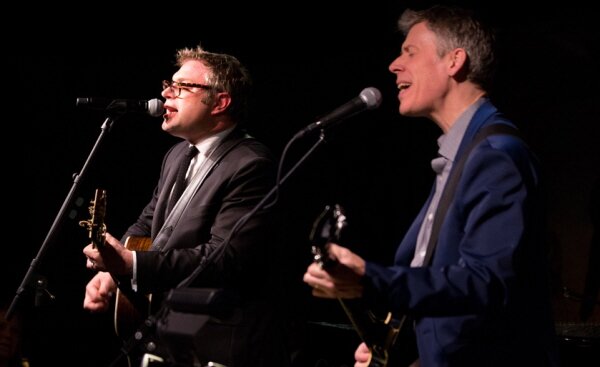 Steven Page chooses his words carefully. I mean this in a couple of ways: the former Barenaked Ladies frontman is a real craftsman as a songwriter – his lyrics surprise and conjure evocative images. But he also doesn’t say much in between songs; maybe a few pithy comments about the next song, nothing that you could really call “patter.” So his current show at the Café Carlyle is not your typical cabaret show. It more closely resembles a concert of laconically funny folk rock. And that’s fine, because this is sophisticated folk rock of a high caliber.

The show leans heavily on Page’s new album Heal Thyself, Pt. 1: Instinct, which deals with themes of love, loss and healing, with a rich vein of sardonic wit, as signified by song titles like “Linda Ronstadt in the ’70s” and lyrics like “You’re talking to a Manchild, / Speak slowly.” They’re all delivered by Page’s powerful, ringing tenor, itself a real pleasure. He’s accompanied by guitarist Craig Northey and Kevin Fox on cello; although that sounds like sparse backing, the three of them manage to make a surprisingly lush sound.

There’s a tension in all of his songs between a surface mischievousness and raw pain not far underneath – a very productive tension, which he works for all it’s worth. Mostly the songs break towards hope, but with a rueful awareness of the difficulties life puts in your way. Recommended.