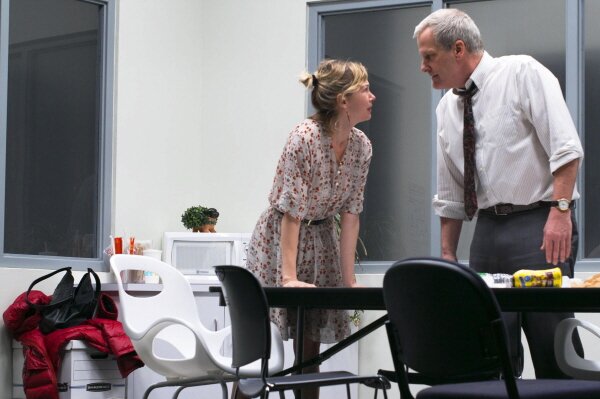 I have very mixed feelings about this play. I often look at shows through the lens of my work as a stage director – I ask myself, would I want to spend several weeks of rehearsal in the world of this play. Blackbird is a play I would never want to direct, I decidedly would not want to spend all that time with Ray and Una, who had a sexual relationship when he was an adult and she was 12. That said, I do recognize Blackbird as a powerful piece of theatre, and this production as an accomplished one.

It’s definitely a juicy meal of “actor meat” for two adventurous performers, and the leads in this production, Jeff Daniels and Michelle Williams, tear into it with gusto. Jeff Daniels plays Ray, a man in late middle age, who’s initial impulse when Una tracks him down at work is to get her the hell out of there. As they hash out the lingering aftereffects of their relationship, Daniels draws a remarkable portrait of a damaged man trying to be honest with himself and Una, not always successfully.

Williams gives just as potent a performance as the brittle, bristling Una. This is particularly true of a long monologue in which she relives their last moment together before a parting that will destroy both of their lives for years to come. Both the character and Williams’s portrayal are complex – she alternately plays the victim and refuses the role, reviles Ray for what he did to her and then shows an unexpected longing for him.

Director Joe Mantello – the man who has taken the daunting task of spending so much time with these damaged souls – keeps things white hot, which is appropriate, if a bit exhausting. Do I recommend Blackbird? Well, it gives no answers for the questions it raises, but the questions themselves are very provocative. So, on balance it’s worth seeing – fun, it isn’t.