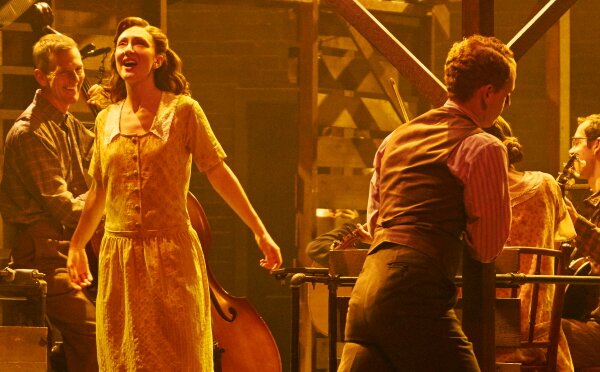 Affable and inoffensive – those are the adjectives that leap to mind when thinking about the Steve Martin / Edie Brickell bluegrass musical Bright Star. It’s a perfectly pleasant evening in the theatre, but on a Broadway musical landscape populated by big, brassy entertainments on one hand, and fresh, innovate think pieces on the other, it may have a difficult time keeping it’s darling little head held high.

Bright Star tells the story of Alice Murphy, a North Carolina literary editor. When she encounters an aspiring young author – a small town soldier just home from World War II – a chain of events is set in motion that take Alice back to the best and worst moments of her own youth.

The best thing about Bright Star is the lovely, delicate and even sometimes sophisticated bluegrass music. As with Sting’s The Last Ship, there’s a rich vein of melody here that is often missed in shows by composers devoted to musicals.

Credit for this must go mostly to Martin – he may best known as a comic actor and writer, but he’s been a master of bluegrass banjo just as long as he’s been a comedian. Over the last decade or so, he’s devoted a lot of energy to composing progressive bluegrass songs (often with Brickell) and almost instantly gained recognition as one of the leading practitioners of the form.

The words – both Martin’s book and his and Brickell’s lyrics – are not nearly as successful. The plot is predictable, but Martin is a sly enough comic writer to play to both the part of the audience that is ahead of the story and that part which is surprised by it. In fact, the revelation of a key happening late in the show is written and played for comedy, since playing it totally straight would be maudlin and laughable in all the wrong ways. Still, a bit too predictable.

I had a decent enough time at Bright Star. I recommend it to you mostly because its charms, though not insignificant, might be easy to miss on today’s Broadway.