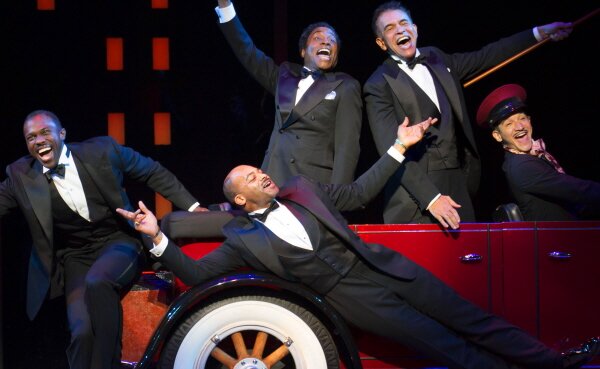 The first act of Shuffle Along is like 42nd Street on steroids – smaller chorus, perhaps, but even more aggressive tap dancing. Then the second act is like an Art Deco version of Dreamgirls‘s second act. Shuffle Along has both the advantage and disadvantage over those shows, in that it is the kind of real story that they both imitate. Because, you see, this is in no way a revival of the groundbreaking 1921 musical Shuffle Along, it’s more like a “making of” coupled with “whatever happened to.”

The original 1921 Shuffle Along was the first Broadway musical to combine a jazz-heavy score with an entirely black creative team. The choreographer of that production, one Lawrence Deas, doesn’t appear as a character in this show, but the highly syncopated dances he created were much commented upon in reviews of the original. Likewise, the most exciting thing about this version is the roof-raising choreography of Savion Glover.

Glover and director/bookwriter George C. Wolfe made the smart decision to punctuate the “history lesson” book of Shuffle Along with blazing song and dance set pieces whose primary reason for existence is electrifying entertainment and pure fun. Sure, maybe sometimes they advance the story, but never in a heavy-handed way.

Wolfe’s book “tells” us about people and events just about as often as it “shows” us – there is a lot of unvarnished narration going on here. That’s usually a theatrical no-no, but Wolfe carries it off with such panache and lightness of touch that it really doesn’t matter.