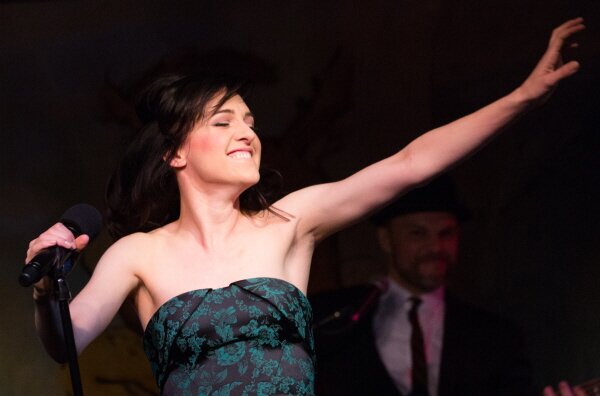 In some ways I’m the ideal target audience for Lena Hall’s current cabaret show. I don’t know how many other people would be so delighted that she chose to do the Sex Pistols’ nihilistic masterpiece “Holidays in the Sun” in that high society boîte, the Cafe Carlyle. And sing it more beautifully than Johnny Rotten could ever hope to, while still preserving the sense of gleeful, feral rage that is so essential to the song.

When Hall is singing full-throated rock and roll, which is most of the show, she is an unquestionable fierce ruling diva. The subject matter of this show, titled “Oh! You Pretty Things”, is a thumb-sketch of Hall’s love life from her teenage years to today. Hall walks though this gallery of ex-boyfriends with her head held high, though I found myself wanting to hear more about her and less about them.

In any event, these tales of past romances are mostly mere springboards to some truly passionate singing. Most memorable are Hall’s rendition’s of Aerosmith’s “Dream On” and a handful of obscure Bowie ballads towards evening’s end. While it was its own kind of fun to see what was basically a rock concert in the Carlyle, I did sometimes feel that we lost lyrics, and Hall is a terrific actor-singer, so that aspect of the act was less than totally satisfying. Overall, though, the show was a genuine pleasure, and Hall an immensely engaging performer. Recommended.