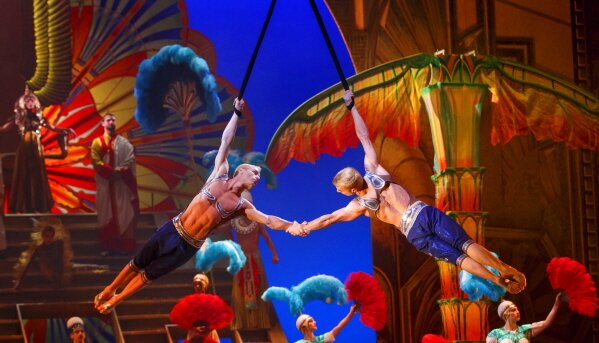 Even though Paramour is billed as a tribute to the golden age of Hollywood, it actually harks back to something much older, that great predecessor to musical comedy the “extravaganza.” A hundred years ago and more, these variety shows veiled with the thinnest of plots were thick on the ground, with titles like A Yankee Circus on Mars. One of the biggest hits of this kind was a version of The Wizard of Oz that had as much to do with Frank Baum’s books as – well, as Paramour has to do with Orson Welles.

And, judged as an extravaganza, Paramour is a marvelous success! The quality and daring of the circus acts that are the show’s real raison d’être are light years beyond anything that could even be imagined in those extravaganzas of old. The show’s design elements are truly eye-filling and -pleasing, combining state of the art technology with tricks that were old when A Yankee Circus on Mars hit the boards in 1905.

If anything I feel like the plot of Paramour should have been thinner. It tells the story of a love triangle between a Svengali director, a young starlet-in-the-making and her piano player. The only purpose of the plot is to provide a frame for Hollywood-inspired spectacle, but every so often, Paramour‘s writers seem to take the whole thing too seriously, which lands us in some of the evening’s most leaden moments.

Paramour is at it its best when taking spectacular flight, and thankfully that’s most of the time. Recommended.