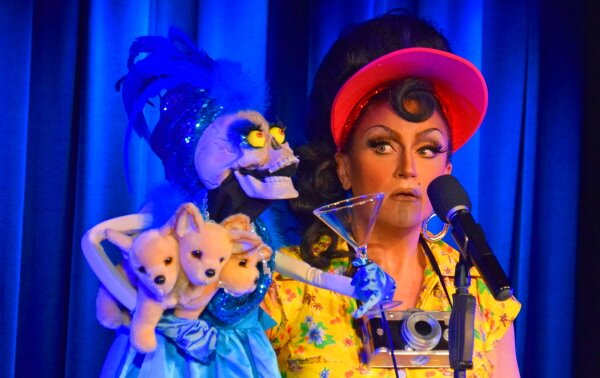 “What the Hell?” That’s the question posed by innovative drag performance artist BenDeLaCreme in her latest show, Inferno-A-Go-Go. BenDeLaCreme’s shows are truly unique, not just in drag performance, but in theatre as a whole. Sure, she includes the goofy song parodies and wisecracking comedy so common in drag. However, she’s after something far more sophisticated – her seductive strangeness creeps up on you.

The queen otherwise known as Ben Putnam is playing less of a ditz this time around, wryly joking about the fact that’s she’s chosen to do a drag cabaret based on Dante Alighieri’s 14th Century Italian epic poem Inferno. She’s more confident this time out, less coy about being more profound than the most chin-strokingly serious straight play, while rarely being less than belly-laugh hilarious.

BenDeLa forever rebukes the notion that arts of clowning, drag, circus, burlesque and ventriloquism are somehow less than other performance forms, somehow stupid. Putnam takes the best of all those forms and whips them into something new, fascinating and intensely intelligent. Not only that, BenDeLa uses these popular forms to probe the very biggest questions, switching from deep existential angst to spiritual lightness in the space of a minute – in between double entendres about sex and booze.

BenDeLaCreme is all about fantastic and ridiculous artifice, but also ultimately really about what that artifice can communicate and express about deeper things, like ethics and how to take care of ourselves and each other. She delivers a show that’s equal parts cheeky fun and insightful art, no small feat. Highly recommended.