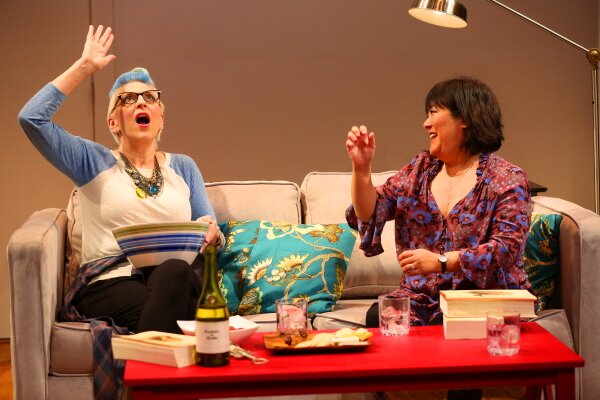 Fat, feminist, funny. In comedian Lisa Lampanelli’s first play Stuffed, it’s that last word that’s key. I’ve worked in feminist theatres, I’ve written for gay publications for a long time, so I can confirm that, just as the title of Susie Orbach’s 1978 landmark book says, Fat Is A Feminist Issue.

I’ve seen and worked on many shows that address how fat-shaming is used to oppress women, and how women negotiate their relationships with food and weight. Of all of them, Stuffed is far and away the funniest treatment of this important issue that I’ve ever seen, and that’s a very good thing.

Right from the beginning, director Jackson Gay’s staging lets us know that this is going to be a very presentational show, with the four women on stage sometimes talking to each other, and sometimes talking to the audience. At its most naturalistic, the play is a casual conversation between Lisa more or less playing herself in her home with guests bulimic Britney (Jessica Luck), confident overweight gal Stacey (Ann Harada), and chronically thin Katey (Zainab Jah).

It’s not surprising that a play by a stand-up comedian should be unafraid of using direct address, and the free flow between different modes of performance is one of the things that keeps the show moving at a brisk clip. Lampanelli occasionally even picks up a mic and goes into full stand-up mode.

The only major lull in the performance came when Lisa told the not always funny story of her relationship with a man considerably larger than herself. This story could have benefited from shifting from “stand up” to “monologue” perhaps even back into “realistic” dialogue. Having it all in mic’ed spotlight only served to point up how long it is.

But that’s a quibble. Some shows I’ve seen on this subject have been painful to sit through, but that is decidedly not the case with Stuffed. In addition to dealing humorously with the subject, Lampanelli writes with a light touch throughout. Recommended.