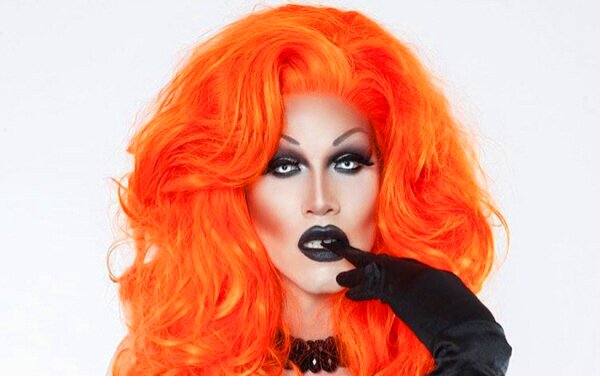 A song about Candy Darling by Lou Reed, and a Rocky Horror song delivered with a dash of Bette Davis and a whole lot of Alice Cooper – these were perhaps the most deliciously telling things about Sharon Needles’s Halloween-themed cabaret act. Needles keeps referring to her shtick as “stupid,” which I chalk up to a knee-jerk – and praise-worthy – punk need to puncture any and all kinds of self-importance. But don’t you believe it: This is one smart poison cookie!

The question I had going into this act was: “how well does this witch sing?” Because, like Bianca Del Rio, I don’t pay much attention to singles and albums released by drag queens. These are people who are meant to be seen live. And the answer? Sharon sings very well indeed, in a glam punk kind of way – the Alice Cooper reference above captures it, with an added dash of Marilyn Manson aggression.

The majority of the songs are from her campy horror albums. On those, the songs are done in a gothy version of the electropop style that is de rigeur for Drag Race graduates (I took a listen after I’d seen the act). Done live with only a piano, their hard rock roots are definitely showing, which makes me very happy. Makes me wonder what they would sound like played balls-to-the-wall Iggy & the Stooges style.

The above-mentioned cover versions are highlights of the evening. To hear the Velvet Undergound’s 1968 classic “Candy Says” sung with great sincerity and emotion by a man in a beautiful wig and dress is quite moving. And Sharon’s hilariously re-lyricized version of “Sweet Transvestite” gives new life to that midnight movie chestnut.

It’s a good thing this act is consistently high quality, cuz it’s a bit of a butt-buster with its nearly hour and a half length. That said, I didn’t really lose patience that whole time. Recommended.