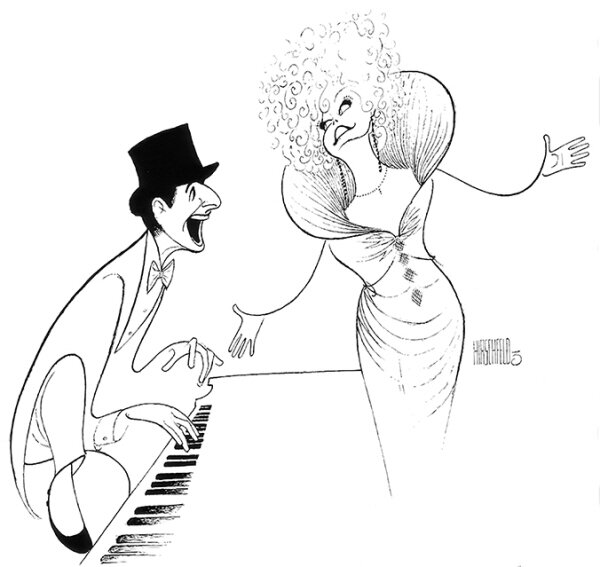 Many years ago, Soprano KT Sullivan and pianist/entertainer extraordinaire Mark Nadler starred in a very smart revue of Gershwin songs called American Rhapsody. The two of them packed a cabaret stage with more talent than many a Broadway musical, and the show ran for nine months. Now, all these years later, they’re doing an entirely new show – their first new one together since 2010 – devoted to the lyrics of Alan Jay Lerner, titled Almost Like Being in Love. It’s every bit as engaging as American Rhapsody.

Nadler is the showier of the two talents: At one point during American Rhapsody he leapt from floor to piano bench, tap-dancing madly, singing and keeping steady eye contact with the audience – all this while playing a complex passage on the piano without even glancing at the keys. He does play, sing and tap dance in the new show, but only two at a time. The result is still pretty stunning.

Stunning, too, is Sullivan’s singing; classically trained, she has also become a master of pop phrasing, bringing the best of both worlds to Lerner’s songs. And of course the songs – written with composers ranging from his regular songwriting partner Frederick Loewe to other geniuses like Kurt Weill and Burton Lane – are stunning as well.

Nadler also does most of the musical arrangements and theatrical conception for the duo’s shows, and he has truly outdone himself here. There’s always some unspoken subtext to the shows that Mark puts together, which gives them a lot of extra oomph.

Here there seems to be something about growing older (especially in the context of show business), which beautifully suits Nadler’s and Sullivan’s status as cabaret legends. This is particularly underlined in a version of “What Did I Have That I Don’t Have”, sung by Mark, which replaces the original pronoun of the beloved – “he” – with “they” looking towards audiences and the entertainment industry.

Almost Like Being in Love is in the same, electrifying league as all of Nadler and Sullivan’s collaborations, which number well in the double digits. This is as giddily entertaining – and breathtakingly smart – as cabaret gets. Highly recommended.