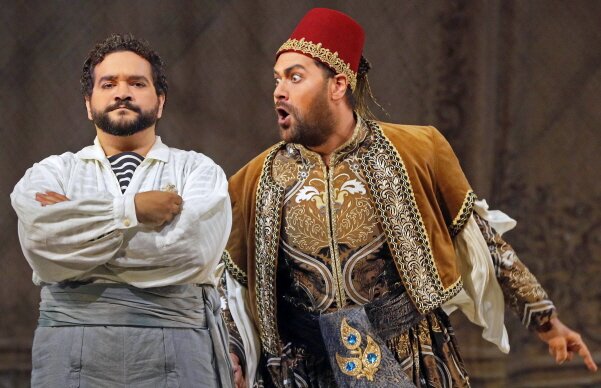 A fun time is had by all. Sure, Rossini’s comedy L’Italiana in Algeri is an exercise in orientalism. But it’s a relatively innocuous one. Little is made of the “Turkishness” of the setting (Algeria was under the control of the Ottoman Turks in 1813 when Rossini wrote the opera). Instead, Turkish potentate Mustafa is simply an ancient comic type, the “braggart soldier,” who happens to be wearing a fez.

As a matter of fact, the tension of the “exotic” setting gives L’Italiana a bite that most frothy bel canto comedy doesn’t have. The plot is, typically, thin: feisty Italian girl Isabella (Marianna Pizzolato, in a charmingly funny Met debut.) turns the tables on the blustery but bumbling Mustafa (the delirously hammy Ildar Abdrazakov), who has captured her after hearing of the delightful nature of Italian women.

The late Jean-Pierre Ponnelle’s production dates from the 1970s, but is is not looking any the worse for wear, mostly thanks to the airy beauty of the sets, which he designed himself. I was thrilled to see Met legend James Levine at the podium, and, as he always does, he found and burnished every bit of orchestral beauty in the score.

The real find in this revival, though, is tenor René Barbera in a spectacular Met debut. I hope I’m not overstating his potential when I say he reminds me of a young Pavarotti. This may be partially because of a slight physical resemblance, but I think it’s more due a similarity in the size and expressiveness of his voice. His role, Isabella’s true love Lindoro, is a relatively small one, but Barbera made a stong impression in his handful of arias, garnering lusty bravos from the audience. Recommended.