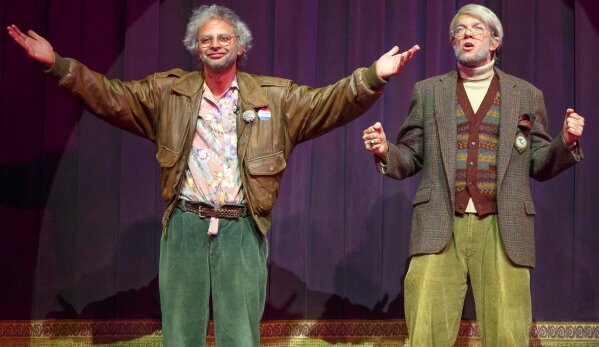 It’s as if The Odd Couple were written by the darkest comedic writers of the 1970s Saturday Night Live (Michael O’Donoghue springs to mind). In one of many semi-improvised sequences, somebody brings up the subject of a night off on Broadway – called a “dark night” – and one of the characters offers “Yeah, a ‘dark night’ for us means when we start making jokes about strangling hookers.”

The character in question is septugenarian George St. Geegland (John Mulaney), a gleefully mean-spirited and perhaps murderous writer, who has been roomates for 40-some years with hapless, shlubby and sometimes childish actor Gil Faizon (Nick Kroll). Oh, Hello is essentially these two oversized, very New York characters granting us an audience for around 90 minutes. Oh sure, there’s a play-within-a-play about the evolution of George and Gil’s freindship, but they break out of it so often that it becomes a part of their wild stream-of-consciousness instead of reigning it in.

Kroll and Mulaney are affectionately spoofing a certain style of New Yorker, and also using these personas to poke fun at everything from theatre to television to film, or really anything that comes into view. And it’s all very meta – about 20 minutes in Gil says “anyway, we’re about to get started…” and you realize that, as much fun as you’ve been having, nothing has really happened yet. The curtain hasn’t even risen, they’ve been standing in front of it the whole time.

Kroll and Mulaney are successful comedians, and Oh, Hello – while nothing revolutionary, or even necessarily coherent – is never anything less than funny. Recommended.