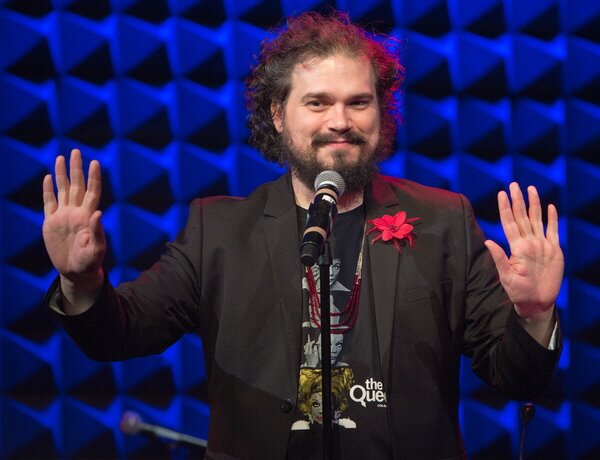 The Meeting* hosted by Justin Sayre – the monthly gathering of the International Order of Sodomites, a fictional “centuries-old organization which sets the mythic Gay Agenda” – will come to an end at the conclusion of its upcoming season. After seven years of audacious humor, trailblazing political discourse and button-pushing cultural exploration, the acclaimed comedy/variety show will be presented for the eighth and final season from September 2016 through May 2017 at Joe’s Pub at The Public Theater. The Fall 2016 season shows are Sunday nights at 9:30pm and will feature tributes to gay icons Bette Midler (October 23), and Angela Lansbury (November 20), with the 8th Annual Holiday Spectacular! being held December 18. There will also be a November 5 show at Oasis in San Francisco.

I talked recently with Sayre about The Meeting*, his new comedy CD The Gay Agenda, and his popular podcast “Sparkle & Circulate”.

What was the origin of The Meeting*?

I had gone to a Radical Faerie event and I had never been to one before I was struck by the community, the discussions that people were having. I left and the whole idea for The Meeting* spurted out in one moment. [Laughs.] “Oh! What if you did a comedy / variety show, that was political and topical, that celebrated different gay icons? Invite people from the community to intepret their work, rather than doing impersonations. Do it month to month.” Really, came up with the title and the whole thing. I called some friends in New York and asked, “Do you think that will work? Would you ever come to something like that?” The response was positive, so I though, okay I’ll try it! See what happens, nothing really lost if it fails – it’s only one night [Laughs.] I thought that for the first year, really, it’s only one night a month if it doesn’t work out how bad is it? It really hit the ground running, we did the first two shows at the Duplex, and they said “this is really smart and fun, and we would love to have you back.” And there was always something new I wanted to do, or new people I wanted to have on it.

Do you think of your monologues as stand-up?

No. I still don’t consider myself a stand up in a strange way. I’m more of a storyteller. To me stand-up is more athletic, they’re more like rock-jumpers going from idea to idea to idea. As a theatre actor, it was more about “this is part of this particular section of the show, and here we need to introduce this idea to help frame the next part.” Like my “hanky code” story was framing emotional baggage. Or we need to introduce the political side of x, y and z for what’s coming up next, so we need to spin it this way.

Who influenced you as a performer?

Especially as a gay performer, as somebody coming out of the cabaret world Justin Vivian Bond was an enormous influence on me, I was obsessed with Justin and Kenny Mellman as Kiki & Herb, when they were playing I would buy tickets for every performance. Just the way they would work this really intelligent commentary into this wild world. Also people like Sandra Bernhard, certainly. And strangely, Stritch. I know that sounds so strange, but I’ve taken a huge thing from her performing style. You know just stand there and do it, deliver. Not anything else really, but just that – she’s always represented that to me, and for better or worse the honesty that comes out of that.

Tell me a little about The Gay Agenda.

We’d always recorded the shows, and about two or three years ago we thought, well, we have all this material, it’d be great to put it together and have a “Greatest Hits” of The Meeting*. Dan Fortune, my producer spearhead the idea, we picked out tracks, listened to dubs and all that stuff. It really represents what The Meeting* has been about very, very well.

In listening to The Gay Agenda, do I detect the influence of Buddy Cole [Scott Thompson’s insanely flamboyant character from Kids in the Hall]?

[Laughs.] Scott actually came to one of the shows and I said to him, “Sometimes I feel like I’m just doing Buddy Cole!” [Laughs.] I grew up with Kids in the Hall, and Buddy Cole is one of the first out people I remember seeing, and talking so frankly about it. I remember being so titillated and excited, thinking “look at him, he’s so gay!” [Laughs.] I take that as a huge compliment, really I do, because I think everything Scott and those guys did was so fantastic and ahead of their time. Thank you for even thinking of me in the same light!

How did the “Sparkle & Circulate” podcast come about?

It’s another way to get more material out there and to keep fans interested. Once our YouTube channel started to take off, we wanted to supply people with a really easy, accessible way to “tune in.” When we started there was just too much on my plate to consider something as complex as creating a whole other show. We have all these great guests at The Meeting*, because of the format of the show I don’t interact with them much. The podcast came out of my desire to actually talk to people I admired, find out where they were at with their work, what queerness or gayness has to do with their work. I found very quickly that I really liked it. And it’s really taken off, it’s a remarkable thing that I never saw coming but really delight in. And that will continue long after The Meeting* is over.

Do you have anything coming up?

Two plays coming up by the end of this year, I’m working on a pilot right now, books coming out. The work has grown exponetially through and because of The Meeting*. I got hired to write for Two Broke Girls because Michael Patrick King saw a clip and thought I was really funny. I got my book deal in a very similar way.

One last thing, as someone who has said that, in the boudoir, calling you “Madame” works just as well as calling you “Daddy,” what’s your take on masculinity?

I don’t deal with it well! [Laughs.] When somebody’s really butch I’m very “What are you doing in my house? Get outta here!” It’s almost what the premise of the show is, in a weird way. Even in the beginning The Meeting* was going to operate from the fact that being gay was never outside the norm but was the norm, even the superior norm. So there are no apologies, no teaching anybody, we’re all in on the joke. It became a celebration of what that means. I think so many people have a struggle with masculinity, because they think its about strength or some kind of bravura, but I so often find that masculinity is about insecurity. It’s about demanding space because you’re worried that somebody else is going to take it. And when you give that up and say “You know, I take up space simply because I’m this person, nobody can take it.” I can invite people into it and make sure that other voices are heard. Everything doesn’t have to be a pissing contest. I think we get a lot more done thinking like that, and are just happier. I take on masculinity because I feel like it’s something that people are forcing down on themselves, or using to force someone out of their space. I’ve seen masculinity being used as a preventative measure, and I don’t like that. I take it on because I want to free people of it, metaphorically take it off the table and poke fun at it. Within expectations of masculinity there’s that thread of misogyny. It’s always shocking to me that little gay kids grow up and want to be like the kid that tortured them in middle school. That seems silly to me. We need to celebrate who we are rather than try to be somebody else.

For tickets and more information about Justin, click here.