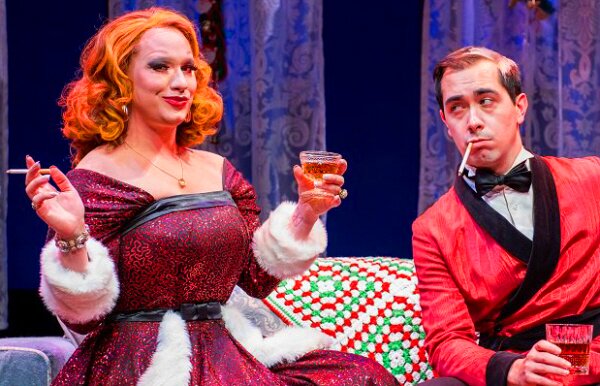 ‘Tis the season – time for drag queens to work a holiday theme to buy Mama a new pair of shoes! There’s a joke in Jinkx Monsoon’s current Xmas show that makes that explicit – “Why do we put ourselves through doing holiday shows? For the paycheck!!!” This particular show also features her musical counterpart, pianist/composer/raconteur Major Scales, and is called Christmas Mourning, mostly in response to the election.

Their biggest hit, The Vaudevillians, was a real stunner, a thoroughly thought-out evening of cabaret theatre, which successfully staked their claim to be regarded as major players in the worlds of both high drag and cabaret. This show is almost as structured – which is very unusual for holiday drag shows. Monsoon and Scales are more entertaining and smart than the vast majority of the competition, which is why they’re capable of producing a holiday drag show that’s nearly as high concept as The Vaudevillians.

They share traumatic Christmas stories, sing a Lana Del Rey song with “exactly as much effort as she herself puts into performing it” and give Mariah Carey the bird. They even sing a couple of strong original songs. One cheekily pays tribute to being gender-fluid. The other (a solo for Scales) pictures a passive-agressive dinner with Trump-voting relatives.