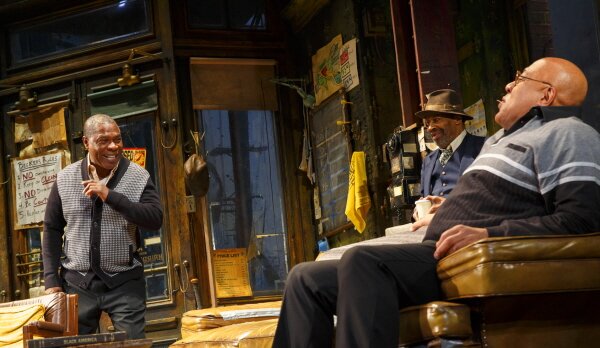 I am a huge fan of playwright August Wilson; I consider him second only to Tennessee Williams in my reckoning of the greatest American playwrights of all time. Jitney was the first to be written of his “Century Cycle” plays – a set of ten incredibly powerful works about the African-American experience in each decade of the 20th Century – but the last to be produced on Broadway. It is also, I believe the only of the cycle plays to have been written in the decade it portrays.

Set in the Hill District of Pittsburgh (as most of the Century Cycle is) Jitney focuses on an office out of which a motley crew make a living by driving unlicensed cabs, the “Jitneys” of the title. When the city threatens to board up the business and the boss’ estranged son returns from prison, pressure reaches a boiling point.

Jitney is clearly the work of a young playwright – the exposition is presented a touch too baldly, and certain transitions are managed with a jarring suddenness that feels accidental rather than intentional. That said, the characters are every bit as vividly drawn as in any other Century Cycle play, and Wilson’s acclaimed mastery of language – in registers ranging from gleefully gritty to eloquently elevated – is already complete and confident.

Director Ruben Santiago-Hudson has been steeped in Wilson’s plays, as performer as well as director, more that just about anybody else. And indeed, Santiago-Hudson knows just where to lean into the young Wilson’s prophetically strong moments, and when to drive his ultra-solid cast carefully over the speed bump. Recommended.