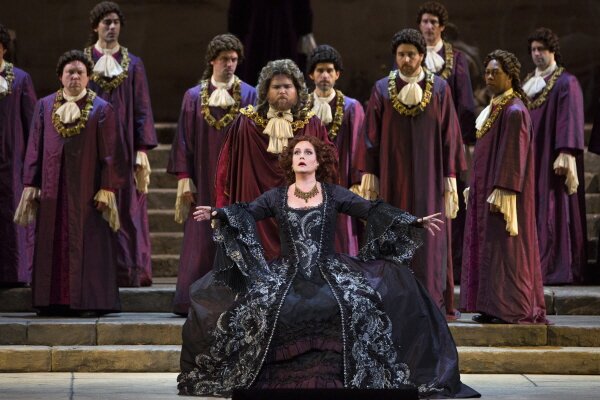 The first of Mozart’s operas written entirely during his adulthood, Idomeneo is a nod to an older, now unfairly ignored, operatic form, opera seria, that was undergoing intense reform at the time (1781). But it also includes innovations that point towards later Romanticism, a style that forms the core of the operatic standard repertoire as we know it today. It connects what was glorious about both ages of opera, and is a great musical glory itself. The gorgeous treatment it is currently being given at the Met under conductor James Levine’s still powerful baton – as well as the always-magnificent Met Chorus under Donald Palumbo – is a must-hear.

Is it a must-see? Well, the production by the late director Jean-Pierre Ponnelle is certainly impressive and handsome, with sepia-toned backdrops inspired by 18th Century etchings by Giambattista Piranesi of Roman ruins. But it has a whiff of the academic about it. Opera seria was an art form aimed at, and patronized by, European nobility, with Greek myths refashioned to give object lessons in good government. Sound a bit dry doesn’t it? And that’s the feel Ponnelle evokes, albeit with a grandeur befitting the Met. I prefer to think of opera seria as action-adventure stories where the action moves at a stately pace, sort of a more magestic Gaurdians of the Galaxy. At least I think that’s the best way to express the many but strange charms of opera seria to a 21st Century audience. In short, a fine production, but not exactly to my taste.

One of the more Romantic-feeling things in Idomeneo is Elettra’s mad scene ”D’Oreste, d’Aiace” and Elza van den Heever hits it with an exciting fury and precision, as well as gestures so wild they border on the comic. What fun! In the title role, Matthew Polenzani correctly pitched his performance toward the light elegance expected from tenors in opera seria (very different from the vocal heroics that fill most of the tenor repertoire), while also allowing Idomeneo’s most emotionally expressive passages full play.

Mezzo Alice Coote make a fine and strong impression as Idamante, Idomeneo’s son, a role originally written for a male castrato soprano. As Ilia, the Trojan princess, Nadine Sierra sang with a considered yet warm beauty closely comparable to Polenzani’s, with a confident strength that carried to the large house with no sign of strain. Recommended.