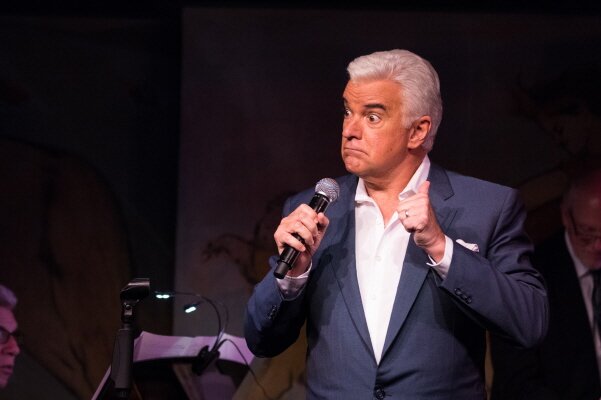 This man has a finely tuned sense of the absurd, but he’s also capable of sincerity so complete that it’s almost embarrassing. Best known as J. Peterman on the NBC sitcom Seinfeld and as a champion on Dancing with the Stars, the early decades of O’Hurley’s career saw him as a fixture of daytime TV soap operas. More recently, he has spent a lot of time playing Billy Flynn in Broadway’s Chicago. Frankly, I think he’d be a revelation in something by Samuel Beckett, but maybe that’s just me.

His current club act at the Café Carlyle is called “A Man with Standards” a reference both to growing up in a more sentimental time, and to the Great American Songbook. As far as the songs go, they’re more 1950s swinging chart hits than the pre-WW II showtunes I associate with “the Songbook” – no Gershwin, Porter or the like. The closest he comes to that is Johnny Mercer’s later hit “Moon River”. That’s not a big deal, however; he does it all with panache and an enormous booming voice that almost renders amplification redundant.

There’s much talk of Sinatra. Most of it is in the abstract, but O’Hurley also tells about singing Sinatra’s own “You Will Be My Music” at a celebration Sinatra attended, and how much he prized Frank’s approval. Toward the end of the show, O’Hurley sings several songs written by Anthony Newley, and the fit of singer and material is terrific. If there ever was a songwriter who seamlessly combined the absurd and the sentimental, it was Newley, and he finds an ideal interpreter in O’Hurley – I’d love to see a whole show of him singing nothing but Newley. Recommended.