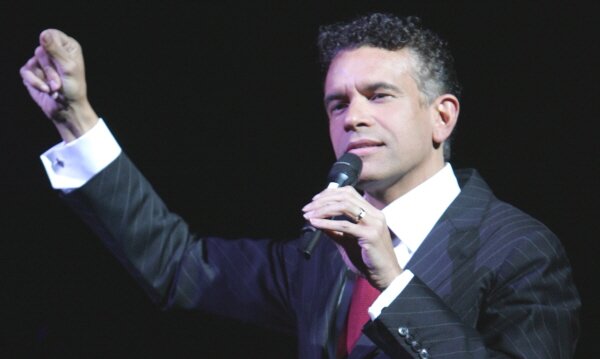 He opens with “There’s No Business Like Show Business,” with just enough spikiness in the string section to remind you that show biz ain’t always easy. That spikiness was heightened even more, to bracing and funny effect, for the number “Gesticulate” from Kismet, which Stokes put fully over the top with appropriately grand gestures.

The next couple of numbers, sung in a medley, are all about deep feelings coupled with equally deep ambivalence. His version of “By Myself” from The Band Wagon is the grandest I’ve heard this side of Judy Garland’s epic rendition. The other song in the medley, “I Won’t Send Roses” from Mack & Mabel, is about an unromantic man warning someone he’s no prize when it comes to love. Stokes plays it with such precision that every bit of melancholy becomes achingly clear.

For “The Man I Love,” Mitchell touchingly “plays gay,” portraying a lonely guy yearning for love – he gives it an almost adolescent innocence. He follows that up by playing several different characters in Company‘s “Getting Married Today,” including the wigged out bride-not-to-be Amy, who sings some of Sondheim’s fastest, trickiest lyrics, which Stokes dashes of with aplomb.

He wraps the act by taking a turn towards optimistic patriotism, which he sees as an important tonic to the dark forces working in today’s world. Highly recommended.