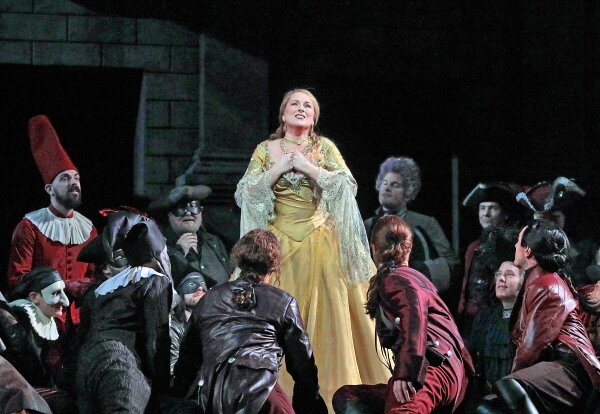 Theatre Review: “Natasha, Pierre and the Great Comet of 1812”

This tops many outlets “Best of 2016” lists, and is often compared favorably with super-musical Hamilton in terms of innovation and sheer vivacity. What do I think of it? Well, similar to the way I feel about Hamilton, I at least really enjoyed it about as much as everyone else. As for innovation, well, this sort of thing has been done a lot before, especially in the 1970s, though I can’t deny the dexterity of execution here far exceeds anything I’m aware of in this vein.

Natasha, Pierre and the Great Comet of 1812 is composer / writer Dave Malloy’s inspired, stylistically eclectic musical adaptation of a 70-page slice of Leo Tolstoy’s epic novel of Russia under attack from Napoleon, War and Peace (some of the spicier and more romantic pages of the novel, it should be said). Director Rachel Chavkin has staged Malloy’s pluckily intellectual creation in a style that in the 1970s was called “environmental,” and today goes by the moniker of “immersive.”

Having worked on immersive productions myself, I’m not taken so much by the idea of Chavkin’s immersive staging – it’s just one of many ways this material could have been staged. What I am taken by is the breathtaking skill and creativity with which Chavkin has applied it.

Here’s one example that stands out for me: our hero Pierre visits a club. For this scene, a 1812 Moscow aristocratic private club is portrayed as S&M night at a 1990s mega-club. It’s a fun idea, but also a really dumb and corny one. Granted that things could get pretty wild at the 1812 club, what with the epic consumption of vodka, but it’s still really apples and oranges.

However, Chavkin, lighting designer Bradley King and choreographer Sam Pinkleton attack the sequence with such precision and energy that the sheer visceral impact is undeniable, even overwhelming, especially in this immersive context. Chavkin and her team bring this combination of smarts and virtuosity to every scene. Highly recommended.

Ella Fitzgerald once called Marilyn Maye “the greatest white female singer in the world”. That’s no exaggeration; she may be the only singer alive who combines a great vocal instrument with interpretative flair and savoir faire equal to Ella’s own. There are younger singers who might posses more powerful voices but I can think of no other singer who possesses Maye’s combination of interpretive ability, rhythmic verve, and vocal range – at 88, her voice is the envy of singers 40 years her junior.

She’s also a “saloon singer”, a singer who has a fantastic rapport with her audience, singing them beloved songs from a startlingly wide variety of genres. These shows at the Metropolitan Room take full advantage of this facet of her talent. Marilyn asks her audience to pick her “Marilyn By Request” set list by making song suggestions when making their reservations. It makes for an evening filled with surprises, and plenty of energy from both sides of the footlights.

Maye appeared on Johnny Carson’s edition of “The Tonight Show” a total of 76 times, a record not likely ever to be beaten by any other singer with any other host. If you love songs of every kind sung like they’re meant to be sung, it just doesn’t get any better than this. Highly recommended.

Patricia Racette’s assured performance in the title role is the main reason to catch the Met’s current revival of Richard Strauss’s 1905 opera Salome. It is a musically complex and demanding role, so it’s no small feat that Racette makes it look and sound easy. The role also covers a lot of vocal range, and Racette rumbled at the bottom and roared at the top, with no sign of strain at either end.

Based on Oscar Wilde’s 1891 play of the same name, Salome tells of the titular stepdaughter of the tetrarch Herod Antipas, who requests the head of John the Baptist (here called “Jochanaan”) on a silver platter as a reward for granting Herod’s request that she perform “the dance of the seven veils.”

Racette performed choreographer Doug Varone’s Dance of the Seven Veils with great verve. The costuming and some of the steps at this point were reminiscent of Weimar Germany, and indeed Racette comported herself like Marlene Deitrich at her most vampy.

This production’s Jochanaan, baritone Željko Lučić, was truly robust in both acting and singing. Tenor Gerhard Siegel gave us a Herod of great vocal nimbleness and power. Mezzo-soprano Nancy Fabiola Herrera as Salome’s mother, Herodias, had a clarion voice and gleeful intensity that brought this smaller role out in higher relief than usual.