Foxy Brown in trouble with NJ cops and pregnant?! 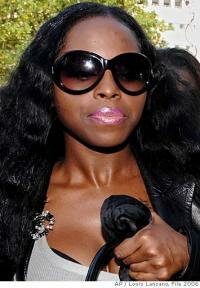 Foxy Brown is in trouble again!  Cops in New Jersey say the mischievous rapper gave her false information after she cruised through a stop sign.

Police say Brown, born Inga Marchand, was talking on her cell and failed to come to a complete stop at an intersection in the township of Mahwah last Wednesday.

I'm sure she totally paused.

After cops stopped Foxy, they ran the tags on her SUV and discovered that the registration had expired.

The fun doesn't end there, after all this Inga at it again!

Cops asked Brown to write down her name and date of birth, she misspelled her name and gave the wrong birth date.  When they couldn't find her name in the system, Foxy fessed up and provided them with the correct info.

That's when they found out the bitch was driving on a suspended license.  Tsk, tsk!

Foxy was was taken into custody for providing false information to a police officer.  The took her down the station and issued the rapper seven tickets and released her on "her own recognizance."

that BLACK BITCH,just continues to get herself into more trouble wit the law!!!

TrackBack URL for this entry:
http://gaysocialites.blog/magazine-mt/mt-tb.fcgi/2031