Britney Spears can't get kids back! 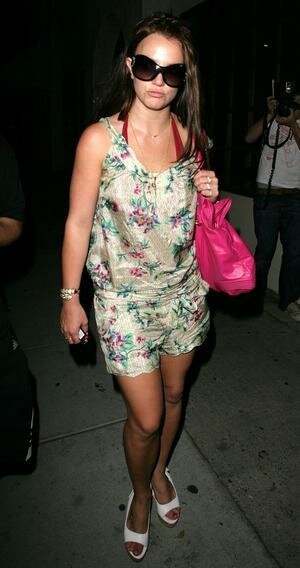 If Britney Spears wants her kids back (and I'm starting wonder if she does), she better get her shit together!

Here's a recap from Britney's day on the town and K-Fed's day in court.  Yes, it's true... while Kevin appeared in court on Wednesday, Brit-Brit went out for a day on the town with her dog.

On Monday, a judge yanked the kids from Britney and gave primary custody to her ex-husband Kevin Federline.  As a result, both parties were to appear in court on Wednesday.  Even though a judge suggested that both Britney and Kevin show up, it wasn't mandatory.  Word is that Britney's lawyer wanted her to be there, but the fallen pop star evidently refused.

What did Britney do instead?  The paparazzi caught Spears and her dog headed to Starbucks, then she posed for photos at a Shell gas station before heading to the extravagant Beverly Hills Four Seasons Hotel with her cousin/ assistant Alli Sims.

Meanwhile, back in court, K-Fed retained full custody of the kids despite the fact that Britney's lawyer wanted Monday's decision reversed giving Brit and Kevin 50/50 custody.  The judge refused, but he did grant Britney visitation rights.

Both Spears and Federline are required to be at the next hearing on October 26th.

Hello! Good Site! Thanks you! ssldpewpyduc

Hello! Good Site! Thanks you! fuaoswryri

TrackBack URL for this entry:
http://gaysocialites.blog/cgi-sys/cgiwrap/cwinters/managed-mt/mt-tb.cgi/2446