« Republican attack Clinton and each other in debate | Main | Anderson Cooper is actually looking hot! »

Fires continue to rip through California 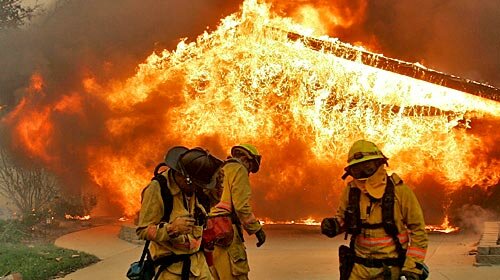 Things got worse Monday for California residents as new fires sprouted and some of Sunday's merged, adding to the 40,000 acres - or 62 square miles - that already have burned.

Hundreds of patients were being evacuated Monday from a hospital and nursing homes in the path of one of more than a dozen wildfires blazing through Southern California. The uncontrollable fires fanned by high speed desert winds killed at least one person, injured dozens more and forced tens of thousands to flee their homes.

As we first told you on Sunday, some of the worst damage was in Malibu.  Celebrities were forced from their homes as the fires destroyed a church, the historic Malibu Castle and many other homes.

The Promises Treatment Center in Malibu was also evacuated on Monday.  That's the fancy rehab center that has hosted a star studded line-up of addicts including Britney Spears, Lindsay Lohan and Ben Affleck.

We will keep you posted as this story continues to develop...