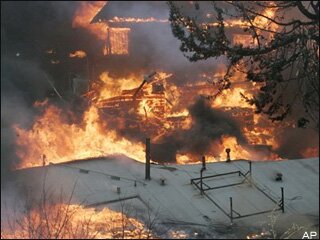 It's a sad day in California where hundreds of homes are being evacuated as fires move from the hills to the beachfront.

At least a dozen fires have bee reported in Southern California.  One person is San Diego County has been killed while several others have sustained injuries.

In Malibu, the blaze has consumed more than 500-acres, according to the Los Angeles County Fire Department.

Malibu Castle, a historic landmark owned by socialite Lilly Lawrence, has burned destroying a collection of priceless Elvis Presley memorabilia.  This report and a report that the castle was in escro to be sold for $17 million also comes from TMZ.blog.

Malibu Presbyterian Church also perished to the fire and the MTA Line 534, which runs along Pacific Coast Highway, is no longer running.

This story is still developing....

TrackBack URL for this entry:
http://gaysocialites.blog/magazine-mt/mt-tb.fcgi/2599