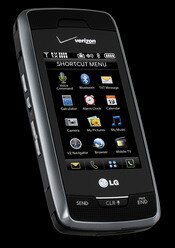 Here is Verizon's version of the infamous iPhone.  Meet the LG Voyager.  What do you think?  Is this good enough to keep you from buying an iPhone and hacking it to work on your carrier?

Daring to look good this season, Verizon Wireless — known for delivering the hottest phones long after its rivals — is parading four trendy multi-media phones on the holiday gadget runway in answer to Apple’s iPhone.

The LG Voyager most closely resembles the iPhone when it’s closed, but the touch screen hinges open to reveal a hidden Qwerty keyboard and another screen.

The keyboard gives the phone extra bulk, leading PC Magazine to call it a “large slab of a phone.” Nevertheless, Verizon can boast, and no doubt will, that Voyager supports a faster network than AT&T uses for iPhone.

The LG Venus has similar features to the Voyager, with a touch screen and a 2 megapixel camera. But it has a traditional phone keypad instead of a Qwerty.

And Samsung’s Juke is an ultra-narrow phone less than an inch wide. It comes in three colors as the cheapest in the range. Juke, a tad small for Web browsing, seems to be aimed a music fans who carry small purses or just like the latest new shapes.

Verizon is also adding Research in Motion’s Pearl to the mix.

Aside from the iPhone, the latest Verizon gadgets will also be facing-off against Palm’s Centro at Sprint and the latest Sidekick at T-Mobile USA. Also expected to hit the U.S. streets this winter is a touch-screen phone from HTC, to which no service provider has publicly laid claim to so far.

So what are the gadget blogs saying about the latest offerings?

Engadget describes the line-up as fashionable and expects it to “divert a few iPhone dollars” from AT&T but it takes a dig at the “boring” 2 megapixel camera in Venus and Voyager.

Gizmodo called the ultra-narrow Juke “cute” and said it was excited about the Voyager, but with a qualification: “Ok, it’s not Apple - not yet near - but it’s a good start.”

Morningpaper’s kindest words for the Voyager are that it’s a “third cousin twice removed of the iPhone” but it sounded under-awed. “You think Apple is shaking in their boots? I don’t.”

Which phone if any of the above will you be buying this year or is there an iPhone in your future?

its gotta be better than that reject iphone

Hello! Good Site! Thanks you! mlechedymuugzv

Hello! Good Site! Thanks you! tzywkepzdfdchv

Hello! Good Site! Thanks you! cqtsmahthbn

TrackBack URL for this entry:
http://gaysocialites.blog/magazine-mt/mt-tb.fcgi/2443