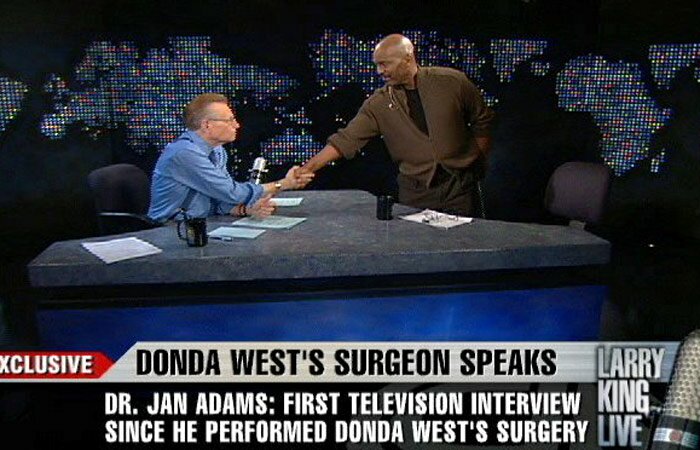 Dr. Jan Adams stormed off the Larry King Live set Tuesday night after showing up very late and refusing to do the interview.

Adams is the doctor who performed plastic surgery on Donda West, Kanye's mom, just before she died.

Instead of just calling ahead to say he wasn't coming, Adams sat across from Larry King to tell him live on the air that he will not appear on the show out of respect for the West family.

Hello, you appeared on the show by showing up and sitting across from Larry.  Why not take the proper measures for cancelling a prime time interview.

It looks to me like someone wants some face time.

Adams said he was respecting Kanye West's request for privacy during this tragic time, but what about all of the other charges against him?

Dr. Adams has had multiple malpractice lawsuit filed against him, sexual battery allegations, three DUIs and a domestic violence restraining order - all recently uncovered by the media.

Why didn't Jan stick around and talk to Larry King about those things?!

Someone seems to be getting a little scared!!

Photo from our new friends at CTV.ca!

TrackBack URL for this entry:
http://gaysocialites.blog/cgi-sys/cgiwrap/cwinters/managed-mt/mt-tb.cgi/2966