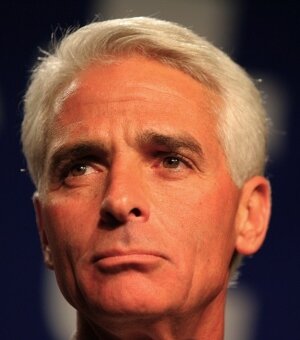 It looks like the Republican party is losing one of their rising starts, but that doesn't mean the rumored-to-be gay Governor of Florida is loosening up on his conservative ways.

Charlie Crist has been looked at as a possible contender for the White House in 2012, but he won't be in the GOP much longer if recent events speak for themselves.

Crist is currently seeking a Senate seat in Florida, but seems to be struggling as to whether he'll run as a Republican or an Independent.  Don't get so excited.  Charlie isn't softening up on right-wing issues, and he probably won't be coming out of the closet any time soon.  While the rest of the world seems to be getting a little more liberal, the Republican party finds itself split.  The tea baggers like Sarah Palin are trying to become more conservative, and it leaves tradition Republicans like Charlie Crist aligning a little more towards the center.

While the Crist campaign denies it, several supports have walked away after noticing that the word "Republican" seems to be slowly getting deleted from his website.  This could create a tough 3-way battle in Florida, and it could create a whole new political atmosphere if enough members of the GOP go indy.

TrackBack URL for this entry:
http://gaysocialites.blog/blog-mt/mt-tb.fcgi/1697