« Have we already forgotten about the Craigslist killer? | Main | Is Florida Governor Charlie Crist abandoning the GOP? »

It's all about the Benjamins with new $100 bill 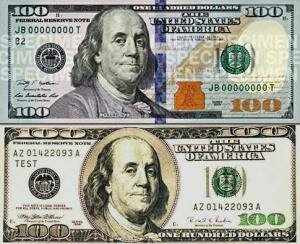 I don't want this to sound like one of those late night makeover infomercials, but here is the before and after picture of the new $100 bill.

That's right, Benjamin Frankin got a make over!  The gay review is that purple and orange work well together, and rumor has it orange is the new pink this summer (finally!)

The US Department of the Treasury isn't trying to make Ben look better.  The folks at DailyTech say it's all about security:

The new $100 bill features new security enhancements to cut down on counterfeiting including a 3D Security Ribbon that has images of 100s and bells which change position as you move the bill and a "Bell in the Inkwell" image that changes colors from green to copper depending on how the bill is oriented.

One of the most favorite PC software for online free movies offers over 3000 channels from around the world. One may not need a translation here to understand this universal language of sex.

Got a Patten Idea, we lets work together!!

Well this is a insightful and very anticipated post. I’m late to it tough because my RSS reader was not working. Looking forward to your next post!

TrackBack URL for this entry:
http://gaysocialites.blog/blog-mt/mt-tb.fcgi/1696